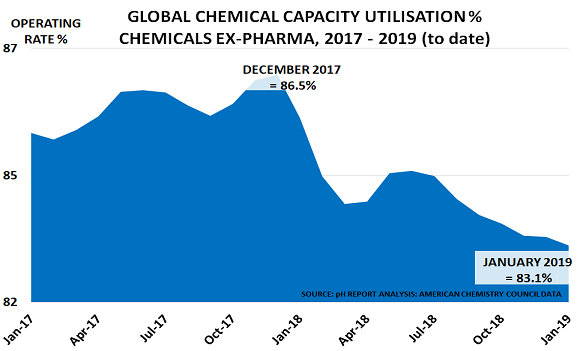 The logic behind the indicator is compelling:

If you want to know the outlook for the global economy, the chemical industry will provide the answers.

It also has an excellent correlation with IMF data, and benefits from the fact it has no “political bias”. It simply tells us what is happening in real-time in the world’s 3rd largest industry.

And now it is telling us that the CU% is continuing to fall. It was down at 83.1% in January, well below the long-term average of 86.5%.  In fact, it has fallen sharply from that level since December 2017.

Ironically, it was exactly a year ago that the world’s major central banks were congratulating themselves on the success of their policies. “Yes”, they said, “it had taken longer than expected, but we can finally declare victory for our post-2008 stimulus policies”. 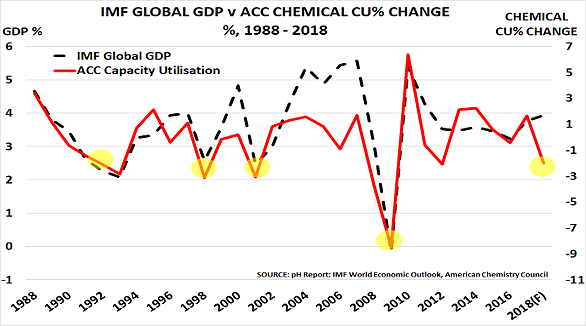 Unfortunately, however, this confidence was misplaced as the second chart suggests.

It shows there was a brief rebound in 2010 after the 2008 Crisis as the first round of stimulus took place. But then growth fell back again.

Instead of learning the lesson, the banks decided to do more of the same.  But repeating the same action in the hope of a different result is not terribly sensible.  And so it has proved.

Next month will see the IMF’s new estimate for 2018’s GDP growth (black line). Chemical industry CU% data (the red line) suggests it will have to be revised downwards, once again. 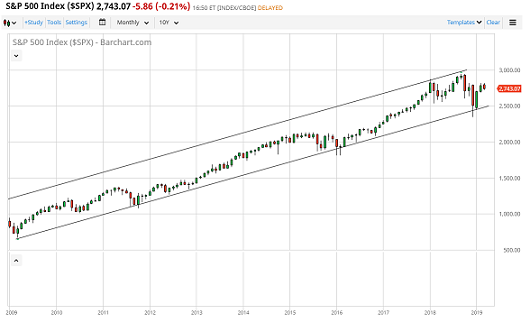 Already, it seems, the central banks are preparing their next round of stimulus. They have finally recognised the slowdown underway in the key areas of the economy such as autos, housing and electronics:

As the 3rd chart shows, the key aim for the western central banks is simply to support stock markets such as the S&P 500. They are determined to keep them moving steadily upwards, in the belief this will stimulate growth. But this, of course, is wishful thinking.  As the Financial Times reported last week, the combined result of stimulus and President Trump’s tax cuts has been that:

“US companies handed their shareholders a record-shattering $1.25tn through dividends and buybacks last year, lifting the post-crisis bonanza to nearly $8tn.”

And as the independent Pew Research Center reported last year:

“Today’s real average wage (that is, the wage after accounting for inflation) has about the same purchasing power it did 40 years ago. And what wage gains there have been have mostly flowed to the highest-paid tier of workers.” 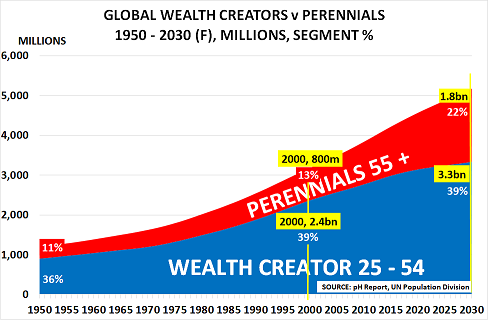 The final chart highlights the “problem” for the central banks.  Their financial models, and all their thinking, are based on the experience of the post-1945 BabyBoomer SuperCycle.

The vast numbers of babies born between 1946-70 first created massive inflation in the 1960s-70s, as demand outstripped supply. But then they created more or less constant growth as the Boomers moved into the workforce. They turbo-charged demand as Western women stopped having enough children to replace the population after 1970, and instead went back into the workforce – creating the two-income family for the first time in history.

But after 2000, this growth began to weaken as the oldest Boomers moved out of the Wealth Creator 25 – 54 age group, when consumption peaks along with earnings.  And today’s “problem” is really that, wonderfully, we now have a entirely new generation of Perennials aged 55+.

They will soon be over one-fifth of the global population, double the percentage in 1950.  In the developed western economies, they are already a third of the population, due to the collapse of fertility rates.  This is great news for us as individuals. But it is bad news for economic growth as Perennials already own most of what they need, and their earnings reduce as they retire.

The S&P 500 and other asset markets are already rising due to central bank promises of more support.

But one thing is certain. Third time around, the main result of more stimulus will again be to increase today’s already high levels of debt and inequality.  It cannot return us to SuperCycle levels of growth.