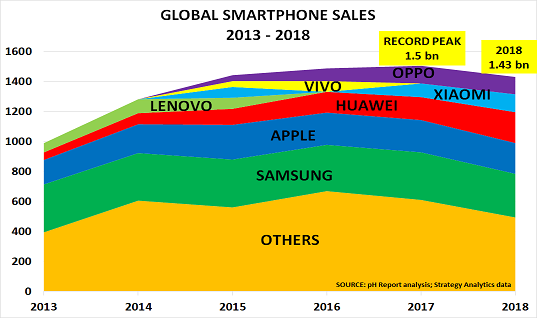 Last November, I wrote one of my “most-read posts”, titled Global smartphone recession confirms consumer downturn. The only strange thing was that most people read it several weeks later on 3 January, after Apple announced its China sales had fallen due to the economic downturn.

Why did Apple and financial markets only then discover that smartphone sales were in a downturn led by China?  Our November pH Report “Smartphone sales recession highlights economic slowdown‘, had already given detailed insight into the key issues, noting that:

“It also confirms the early warning over weakening end-user demand given by developments in the global chemical industry since the start of the year. Capacity Utilisation was down again in September as end-user demand slowed. And this pattern has continued into early November, as shown by our own Volume Proxy.”

The same phenomenon had occurred before the 2008 Crisis, of course, as described in The Crystal Blog.  I wrote regularly here, in the Financial Times and elsewhere about the near-certainty that we were heading for a major financial crisis. Yet very few people took any notice.

And even after the crash, the consensus chose to ignore the demographic explanation for it that John Richardson and I gave in ‘Boom, Gloom and the New Normal: How the Western BabyBoomers are Changing Demand Patterns, Again’.

Nothing seems to change.  So here we are again, with the chart showing full-year 2018 smartphone sales, and it is clear that the consumer downturn is continuing:

And this time the financial outlook is potentially worse than in 2008.  The tide of global debt built up since 2008 means that the “World faces wave of epic debt defaults” according to the only central banker to forecast the Crisis.

“WALL STREET, WE HAVE A PROBLEM” 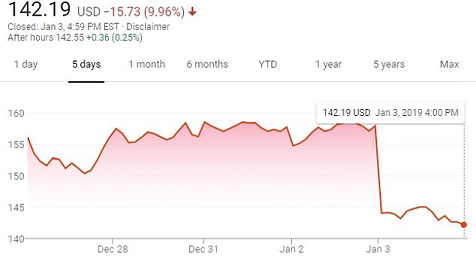 So why did Apple shares suddenly crash 10% on 3 January, as the chart shows? Everything that Apple reported was already known.  After all, when I wrote in November, I was using published data from Strategy Analytics which was available to anyone on their website.

The answer, unfortunately, is that markets have lost their key role of price discovery. Central banks have deliberately destroyed it with their stimulus programmes, in the belief that a strong stock market will lead to a strong economy. And this has been going on for a long time, as newly released Federal Reserve minutes confirmed last week:

The result is that few investors now bother to analyse what is happening in the real world.

They believe  they don’t need to, as the Fed will always be there, watching their backs. So “Bad News is Good News”, because it means the Fed and other Western central banks will immediately print more money to support stock markets.

And there is even a new concept, ‘Modern Monetary Theory’ (MMT), to justify what they are doing.

THE MAGIC MONEY TREE PROVIDES ALL THE MONEY WE NEED 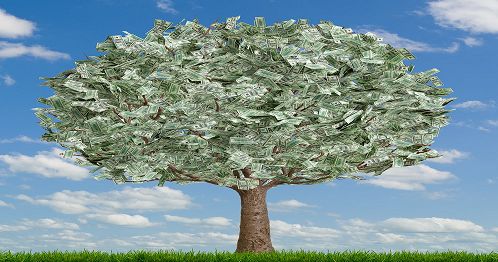 There are 3 key points that are relevant to the Modern Monetary Theory:

The scholars only differ on one point.  One set believes that pumping up the stock market is therefore a legitimate role for the central bank. As then Fed Chairman Ben Bernanke argued in November 2010:

The other set believes instead that government can and should spend as much as they like on social and other programmes:

“MMT logically argues as a consequence that there is no such thing as tax and spend when considering the activity of the government in the economy; there can only be spend and tax.”

The result is that almost nobody talks about debt any more, and the need to repay it.  Whenever I talk about this, I am told – as in 2006-8 – that “I don’t understand”.  This may be true. But it may instead be true that, as I noted last month:

“Whilst Apple won’t go bankrupt any time soon, weaker companies in its supply chain certainly face this risk – as do other companies dependent on sales in China. And as their sales volumes and profits start to fall, investors similarly risk finding that large numbers of companies with “Triple B” ratings have suddenly been re-rated as “Junk”:

I fear the coming global recession will expose the wishful thinking behind the magic of the central banks’ money trees.