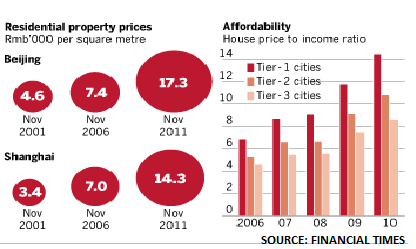 Saturday’s blog post highlighted the risk of a hard landing in China.

This risk is very real, and is centred on the government’s need to achieve a difficult balance between reducing today’s high rate of food price inflation, whilst not collapsing the property market.

House prices are now falling in 60 Chinese cities. An excellent report by the Financial Times highlights the key issues, which are summarised in the chart above. As in the USA during the sub-prime bubble, we may well have reached the point where China’s credit bubble can expand no longer.

The problem is our old friend, unrealistic expectations. As the FT notes:

“It is easy to forget that the market is just over a decade old and, apart from a brief dip in the midst of the 2008 financial crisis when transactions dried up, most Chinese have only seen prices double every couple of years and never seen them fall.”

Another key factor behind the rise in prices has been China’s lack of a proper system of social security. As a result, most women believe owning a home is essential for any man wanting to get married.

Young bachelors have thus routinely turned to their extended families for help with raising the finance for a home. And as prices were doubling every 2 years over the past decade, the ‘bank of mum and dad, and grandparents, and cousins’ has always been happy to help.

Equally, the local provinces are dependent on property development for up to 40% of their income, according to the FT. And they quote Prof Yi Xianrong of China’s prestigious Academy of Social Sciences as warning

“Right now the high housing price is not due to limited supply – it is because of endemic speculation. But the government doesn’t combat speculation because high prices keep GDP growth and revenues high.”

Today. however, the government’s main concern is reducing the inflation caused by the credit bubble it unleashed in Q4 2008. It therefore has to reduce bank lending, even if this weakens property markets. Food price inflation is its key concern, and this rose again to 9.1% in December.

96% of China’s population earn less than $20/day according to the Asian Development Bank. So rising food prices inevitably lead to a risk of social unrest. In turn, this now makes it difficult for the government to support the property market.

Effectively, it may therefore be caught between a rock and a hard place.

Inflation and social unrest would increase if it launched another stimulus programme and allowed lending to boom again. But the current lending slowdown risks causing future unrest amongst all those who have bought into the market in the belief that prices would never fall.

The blog sees no easy way through this crisis. It can only repeat its warning of a year ago. We may be about to “discover, too late, we have simply been in the middle of yet another China ‘boom and bust’ scenario”.