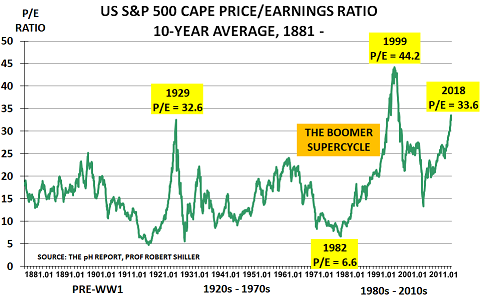 The tweets were a core activity in the first year of his Presidency, when he was still feeling his way into the job.

But now, as last week’s sackings of his Secretary of State and National Security Advisor confirm, his focus has returned to the promises made in his Gettysburg speech, before the election:

“I will begin taking the following 7 actions to protect American workers (my emphasis and status unpdate):

FIRST, I will announce my intention to renegotiate NAFTA or withdraw from the deal under Article 2205 – UNDERWAY
SECOND, I will announce our withdrawal from the Trans-Pacific Partnership – DONE
THIRD, I will direct my Secretary of the Treasury to label China a currency manipulator – TRADE WAR NOW BEGUN
FOURTH, I will direct the Secretary of Commerce and U.S. Trade Representative to identify all foreign trading abuses that unfairly impact American workers and direct them to use every tool under American and international law to end those abuses immediately – UNDERWAY
FIFTH, I will lift the restrictions on the production of $50 trillion dollars’ worth of job-producing American energy reserves, including shale, oil, natural gas and clean coal– UNDERWAY
SIXTH, lift the Obama-Clinton roadblocks and allow vital energy infrastructure projects, like the Keystone Pipeline, to move forward – UNDERWAY
SEVENTH, cancel billions in payments to U.N. climate change programs and use the money to fix America’s water and environmental infrastructure – WITHDRAWN FROM UN CLIMATE CHANGE PROGRAMME”

Trump knows he faces a tough fight in November’s mid-term elections, when the Democrats could win control of Congress.  So he is refocusing on the issues that won him the White House in 2016. As I noted before his Inauguration:

“If President Trump pursues the policy program on which he was elected, we are therefore about to live through a paradigm shift in America’s role in the world. This is his right as President, and America’s right as a free country. But it is critical that all of us recognise the change about to take place.”

This programme is quite different from the historical Republican platform focused on free trade and sound money.

The comparison between President Reagan’s 1986 tax reform and Trump’s tax cut last year highlights the different agenda.  Reagan built consensus over 3 years, and ensured his reform was revenue neutral. Trump simply used the Republican majority to force through the tax cut, and ignored warnings that it could add $1tn+ to the deficit.

FINANCIAL MARKETS HAVE BEGUN TO TUMBLE AS THE FAANGS’ MARKETS MATURE
Wall Street has had a great run, as the chart of Prof Robert Shiller’s CAPE Index confirms.

Essentially, markets have been operating on the “5 Everyone concept”© .  There are 3 core “Everyones”:

But since January, the benchmark S&P 500 Index has seen these “3 Everyones” start to be questioned: 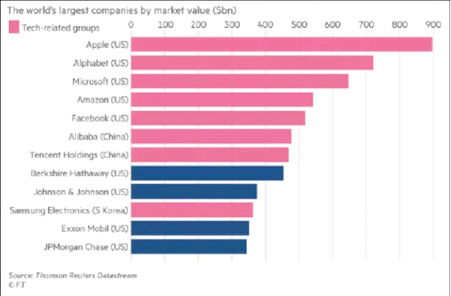 The key issue is the growing doubt over the outlook for the super-hot tech sector, and the FAANG tech stocks.  This challenges the 4th “Everyone” – that “Everyone agrees” Facebook, Apple, Amazon, Netflix, Google (and Chinese companies such as Alibaba and Tencent), will dominate the global economy for decades ahead.

Last year, as the Financial Times chart confirms, the world’s Top 7 companies by market value were all tech-based.

But what if this idea is wrong?  Can tech really continue to grow to the sky, or are its markets starting to mature?

Similarly, the growing political storm over Facebook suggests its days of stellar revenue and profit growth are ending.

Questions are also being raised about the viability of tech’s business model, which depends on users giving up their personal information for free.

After all, history shows that even the highest-flying companies and markets eventually mature.  At that point, Price/ Earnings ratios begin to drop, and investors start to refocus on dividend payments instead.

Unfortunately for Wall Street, it seems that Trump’s attack on free trade may turn out to be the catalyst for their discovery that tech’s days of exponential growth are over.

INVESTORS FACE 5TH “EVERYONE” CHALLENGE, AS “EVERYONE REALISES” MARKETS HAVE PEAKED
Trade wars are not normally good for business.  Nor is political uncertainty – which is certain to rise as President Trump energises core voters ahead of the mid-terms.  His Gettysburg policies set out, after all, “to protect American workers“.

If Trump’s initial focus on financial markets was indeed purely tactical, markets now have a bumpy ride ahead. The risk is that gradually, a 5th “Everyone” will become apparent – that “Everyone realises” markets have peaked.