“We begin this editorial with an apology to you, our faithful readers. In March, we described the Brexit situation, then careening through its third year and nowhere close to resolution, as an “omnishambles.

“An omnishambles is a state of utter chaos, total disorder and perfect mismanagement – which brings us to our apology. If you’ve been paying any attention to British Prime Minister Boris Johnson, you know that, in declaring United Kingdom politics to have reached peak shambolic six months ago, we spoke too soon. Oh, did we ever.”

Within the UK, most people are totally confused by the mixed messaging surrounding Brexit.  Was it effectively postponed again when Parliament passed a law meant to stop No Deal? Or is it all still going to go ahead – deal or no deal – on 31 October, as the prime minister insists. Nobody knows. 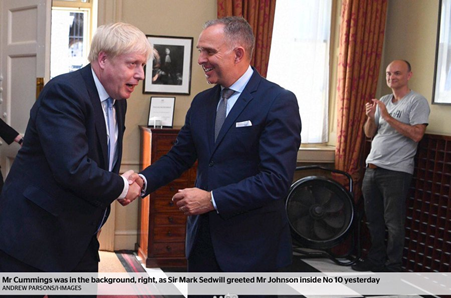 There has also been no debate about what kind of policies should be pursued after Brexit. Instead, the media has often focused on the influence of  Johnson’s chief of staff, Dominic Cummings (pictured above, in casual dress).

Cummings led the Leave campaign under Johnson, and continues to carry out Johnson’s strategy today.  And whether by accident or design, his apparent fondness for tee-shirts also seems to be proving a useful tactic for diverting media attention away from discussion of potential food shortages. 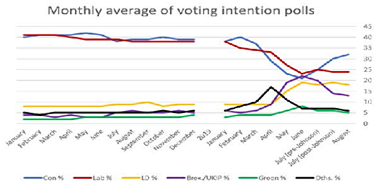 Behind all the spin, Johnson’s strategy is simply responding to the opinion polls above.  He knows he has to win back Brexit Party voters if he wants to win a General Election.  Understandably, therefore,  he is going hard for the exit, declaring that he’d “rather die in a ditch” than leave after 31 October.

“Luckily” for him, he is up against Jeremy Corbyn – my local MP – who has completely failed to present a coherent policy on Brexit.  And Johnson has exploited this position by focusing on the Opposition’s continued failure to answer the critical question – “what would any extension be for?”

It seems the Liberal Democrats will finally come off the fence under their new leader, Jo Swinson, and decide to campaign to remain in the EU. But we will have to wait to see if Labour’s Conference can force Corbyn to abandon his long-standing opposition to the EU.

If not, it is quite possible that the EU27 could refuse the extension request at next month’s Summit, if it doesn’t seem likely to lead to a second referendum or a new government.

Germany’s Chancellor Merkel has already set out her belief that Johnson wants to convert the UK to a form of Singapore-on-Thames. with a low tax, light-touch regulatory environment in direct opposition to the rules of the EU Single Market.

3 alternative and quite different scenarios therefore exist for the Brexit endgame:

At the moment, Johnson clearly sees No Deal as his best option, as it means he doesn’t have to compromise.  So it is no surprise that the Foreign Secretary has warned they will “test (the No Deal Act) to the limit”, in order to leave on 31 October without a deal.

The compromise of a Plan B would clearly lose him DUP and Brexit Party votes.  But it might offer Johnson his best chance of staying in office, if the Opposition did agree to push for a new referendum. It would be humiliating, to say the least, if his term in office proved the shortest in history.

The next few weeks may therefore compel the ‘Globe and Mail’ to issue yet another apology to its readers.