Skip to content
Home / Is your business Ready for Brexit?

Time is running out for the UK government to agree a Brexit deal with Europe.  As my new analysis for ICIS Chemical Business highlights, companies need to move quickly to prepare for the “No Deal” scenario

Legendary England footballer Gary Lineker best summarised the general sense of disbelief over the state of  the Brexit negotiations when tweeting in July:

“A wealthy nation putting itself in a position where it has to stockpile food, medicine, etc., in times of peace is utter madness. What Are We Doing?” 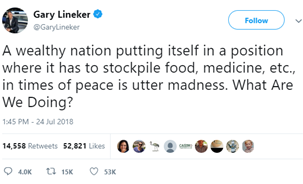 Lineker’s concern was confirmed last month by the head of the British Chambers of Commerce who warned that “precision is what is required” regarding the Brexit process, rather than “declaratory statements”.

Yet today, with less than six months to go before the UK officially leaves the EU, businesses still do not know if the UK will simply crash out with no deal on 29 March, with no transition agreement in place. This is almost unbelievable, given that the EU is the UK’s largest trading partner, taking 44% (£274bn) of UK exports in 2017, and provides 53% (£341bn) of all UK imports, according to a July report from the House of Commons library.

One problem is that the cabinet only finally agreed on its chosen option for the new EU relationship in August. In turn, this means the civil service is only now starting to be able to advise sector groups, trade associations and other experts on the key issues involved.

A second problem is that the new Brexit department had to be created virtually overnight after the June 2016 referendum, and the average age of its staff is just 31 years. Many have no personal experience of the enormously complex issues involved.

CHEMICALS IN NO-MAN’S LAND
Chemical companies are, of course, right in the middle of this no-man’s-land. They depend on frictionless movements of raw materials and intermediates between their various EU sites, and they are heavily integrated into just-in-time supply chains with key customers such as the auto and food industries.

The UK government has recently warned of possible major disruption if there is a No Deal Brexit, and the Key UK Risks chart highlights the key economic and business risks that lie ahead.

The current gap between the UK and EU positions was emphasised in chief EU negotiator Michel Barnier’s recent evidence to the UK Parliament:

‘May achieves a withdrawal agreement’
The UK and EU will both lose from a No Deal Brexit and so in principle they could simply “fudge” the trade issue for future discussion during the transition period until December 2020. But although both sides emphasise that 80% of the withdrawal agreement is now agreed, this only highlights that the most difficult 20% still lies ahead – issues such as Ireland, immigration and EU citizen rights, and future trade relations.

‘Markets cause a panic on Tory benches’
What happens if May does stumble at this point and fails either to gain an agreement with the EU27 or to get it safely through the Cabinet, Tory party and Parliament? As the Risks chart shows, this might well lead to financial market pressure on the pound and interest rates. This would also represent more bad news for chemical companies. If even 20 Tory Eurosceptics vote against a deal, then May would have to rely on opposition party votes, and their support looks unlikely given Labour’s “six tests” for approving any deal.

‘No deal’ scenario
Exchange rate volatility could become a critical issue for companies and investors if this scenario is reached, with the pound possibly falling towards parity with the US dollar and the euro, causing interest rates to rise. Foreign investors currently own 28% of the government’s £1.9tn debt, and concern over the value of the pound could lead some to reduce their holdings of government bonds. 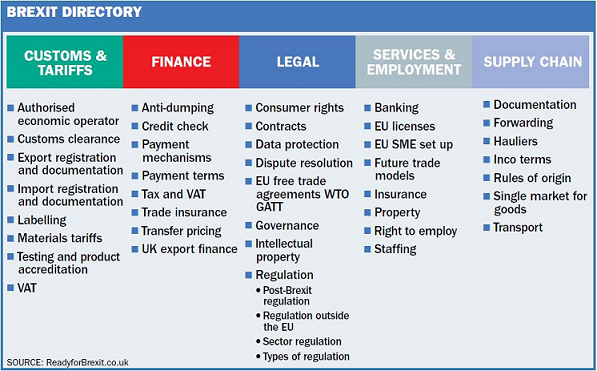 The Brexit Directory chart from Ready for Brexit shows the scale of the risks involved.  It highlights how Brexit potentially involves almost every aspect of business – from Customs & Tariffs through Finance and Legal issues, to Services & Employment and the Supply Chain.

Of course, many major companies have already spent months and millions of euros in preparing detailed contingency plans. Some are already stockpiling key raw materials and products, and revising relevant contract clauses.

But smaller businesses do not have these resources. Surveys show that only one in seven have done any forward planning for a No Deal Brexit, and official government guidance for a No Deal has only just begun to appear. In turn, this creates a clear risk of widescale disruption, as today’s highly integrated supply chains are only as strong as their weakest link. The lack of just one raw material can stop a production line.

As Gary Lineker says, it is hard to believe this is happening. But it is, and so far “declaratory statements” rather than precise detail continue to dominate the process.

It is also easy to forget that a No Deal Brexit will not just impact the UK. US and EU-based businesses involved in a supply chain that involves a UK company face a clear risk of disruption.

This is why I have helped to launch Ready for Brexit with other industry colleagues. As the Scout motto reminds us, to ‘Be Prepared’ could be critical for business survival if a No Deal Brexit does occur.

The post Is your business Ready for Brexit? appeared first on Chemicals & The Economy.