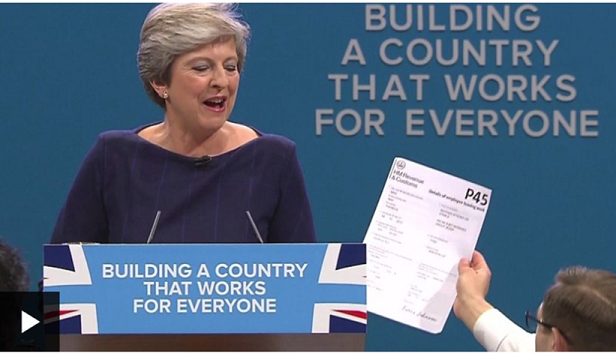 UK voters were never very bothered about membership of the European Union (EU) before the Brexit vote last year.  Opinion polls instead showed they shared the general feeling of voters everywhere – that their country was heading in the wrong direction, and it was time for a change.  Now, last week’s Conservative Party conference showed that the government itself, and the prime minister, have also lost all sense of direction.

The problem is that nobody has any idea of a what a post-Brexit world would look like for the UK.  The Leave campaigners famously told the voters it would be a land where the UK would no longer “give” £350m/week ($455m) to Brussels, and could instead spend this money on improving health care and other worthy objectives.  This, of course, was a lie, as the head of the National Statistics Agency has since confirmed.  But then-premier Cameron failed to call out the lie at the time – fearing it would split his Conservative Party if he did.

15 months later, this lie has again come centre stage as the Foreign Secretary, Boris Johnson, revived it before the Conference as part of his bid to replace premier May:

“Once we have settled our accounts, we will take back control of roughly £350 million per week.  It would be a fine thing, as many of us have pointed out, if a lot of that money went on the NHS.”

As a result, the splits in the Conservative Party are out in the open, with its former chairman now calling for a leadership election and claiming at least 30 law-makers already support the move.  Bookmakers now expect May to leave office this year (offering odds of just evens), and suggest the UK will have a new election next year (odds of 2/1), despite the fact that Parliament has nearly 5 years to run.

 As the photo shows, she was humiliated in her main speech to the Conference by a prankster handing her a P45 form (the UK’s legal dismissal notice), and claiming Johnson had asked him to do it
 Her previous set-piece speech in Florence on negotiations with Brussels over the UK’s exit arrangements had also rebounded, as it made clear the Cabinet was divided on the terms that should be negotiated

Voters don’t like being lied to, and they don’t like governments that are unable to govern because of internal splits – particularly when the splits are over such a critical issue as the UK’s economic future.  Unsurprisingly, therefore, the opposition Labour party are now favorites to win the next election, and their leader, Jeremy Corbyn, is favourite to become the next prime minister.  This, of course, would confirm my suggestion 2 years ago:

“My local MP, Jeremy Corbyn, won the UK Labour Party leadership election on Saturday with a 60% majority. An anti-NATO socialist, he has represented the constituency for 32 years, and has never held even a junior ministerial post. Now, he could possibly become the UK’s next Prime Minister.

“His path to power depends on two developments taking place, neither of which are impossible to imagine. First, he needs to win back the 40 seats that Labour lost to the Scottish Nationalists in May. And then he has to hope the ruling Conservative Party tears itself apart during the up-coming Europe Referendum.”

Unfortunately, Corbyn would be unlikely to resolve the mess over Brexit.  In the past, before becoming leader, he took the Trotskyist view that the EU is a capitalist club, set up to defraud the workers.  He has since refused to confirm or deny his views on the subject, but he did take very little part in the Referendum campaign last year.  Had he been more active in arguing the official Labour Party position of Remain, it is unlikely that Leave would have won.

Today, he is far more concerned over the likely result of a Labour Party win on financial markets, with his shadow Finance Minister admitting recently they were “war-gaming” in advance of an expected currency crisis.  UK interest rates are already rising, as foreign buyers wonder whether they should continue to hold their current 28% share of the UK government bond market.  Clearly, it is highly likely that a Labour government would need to return to capital controls after a 40-year break, to protect their finances. 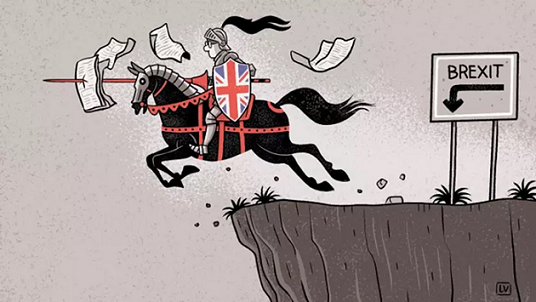 A VERY HARD BREXIT IS BECOMING ALMOST CERTAIN
The confusion and growing chaos in the political world means that the detail of Brexit negotiations has taken a back seat.  The UK has still to make detailed proposals on the 3 critical issues that need to be settled before any trade talks can begin – rights of EU/UK citizens post-Brexit; status of the N Ireland/Ireland border; UK debts to Brussels for previously agreed spending.  And most European governments are now far more focused on domestic concerns:

  As I warned a year ago, the Populist Alternative für Deutschland did indeed “gain enough seats to make a continuation of the current “Grand Coalition” between the CDU/CSU/SDP impossible” in Germany
  Spain has to somehow resolve the Catalan crisis, following last week’s violence over the independence referendum
  Italy has autonomy referenda taking place in the wealthy Lombardy and Venice regions in 2 weeks, and then faces a difficult national election where the populist 5 Star movement leads most opinion polls. The scope for political chaos is clear, as the wealthy Northern regions want to reduce their tax payments to the south – whilst southern-based 5 Star want more money to go in their direction

President Trump has also undermined the Brexit position.  He initially promised a “very big and exciting” US-UK trade deal post Brexit.  But since then the US has supported a protectionist move by Boeing to effectively shut-down the vital Bombardier aircraft factory in Belfast, N Ireland, despite May’s personal appeals to him. And last week, it joined Australia, New Zealand, Argentina and Brazil in objecting to the EU-UK agreement on agricultural quotas post-Brexit.

I have taken part in trade talks and have also negotiated major contracts around the world.  So I know from experience the UK could never have achieved new deals within the 2 years promised by leading Brexiteers.

Today, it is also increasingly clear that May’s government doesn’t have the votes in Parliament to agree any financial deal that would be acceptable in Brussels.  So whilst large parts of UK industry still assume Brexit will mean “business as usual”, European companies are being more realistic.    In a most unusual move, the head of the Federation of German Industries spelt out the likely end result last week:

“The British government is lacking a clear concept despite talking a lot. German companies with a presence in Britain and Northern Ireland must now make provisions for the serious case of a very hard exit. Anything else would be naive…The unbundling of one of Germany’s closest allies is unavoidably connected with high economic losses. A disorderly exit by the British from the EU without any follow up controls would bring with it considerable upheaval for all participants. (German companies feel) not only that the sword of Damocles of insecurity is hovering over them, but even more so that they are exposed to the danger of massive devaluation.”

UK, European and global companies are already drawing up their budgets for 2018 – 2020. They cannot wait until Brexit day on 29 March 2019 before making their plans. And so, as it becomes increasingly obvious that the UK-EU talks are headed for stalemate, and that ideas of a lengthy transition period are simply a dream, they will make their own plans on the assumption that the UK will head over the Brexit cliff in 18 months time.

Nobody knows what will happen next.  But prudent companies, investors and individuals have to face the fact that Brexit, as I warned after the vote, is likely to be “a disaster for the UK, Europe and the world“.