Skip to content
Home / “We now understand better how little we understand about inflation”, Jay Powell, US Federal Reserve Chairman 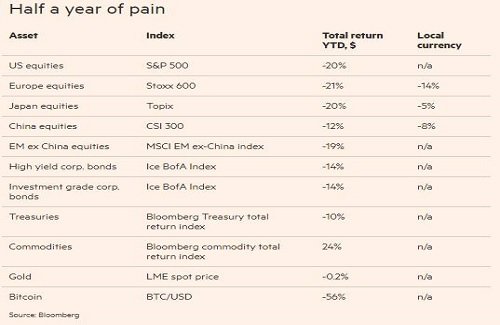 The chemical industry is the best leading indicator for the global economy. But unfortunately, policymakers prefer to work with very out-of-date models of how they think the world “should be”. They don’t ‘look out of the window’ and focus on what the real world is trying to tell them.

We saw this in the run-up to the 2008 subprime crisis, and we have seen it again with the current recession.

In November 2008, we were recognised by the Financial Times and others as having warned of the problems ahead. But as the FT noted at the time in an open letter to the Queen of England:

“Why didn’t people see it coming? Some did, Ma’am. Some did. But it doesn’t mean they were listened to. And there is a long history of people in authority running up vast debts without public accountability”.

And now exactly the same thing has happened again, as the chart shows. Virtually every major stock market has gone down in H1. And yet every time we tried to point out what was happening, we were told, just as in 2005-8:

“You don’t know what you are talking about” 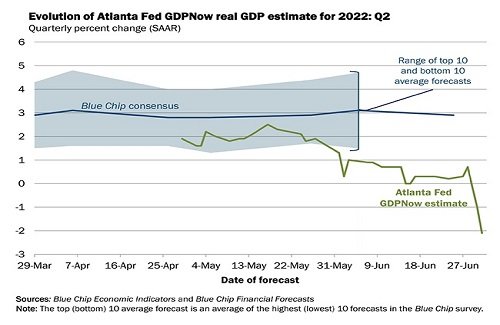 The chart from the Atlanta Fed highlights the sorry truth that US GDP is likely to be negative again, just as in Q1. And almost inevitably,  the official National Bureau of Economic Research will confirm a recession is now underway.

The problem is that economists have been brought up to believe that:

“Inflation is always and everywhere a monetary phenomenon”

But as Powell admitted last week:

“So really, everyone had the same model — which was the Phillips curve model — and it just was not capable of producing high inflation. But what it was missing was something that’s been completely missing in the data for 40 years, which is basically the collapse of the supply-side.” 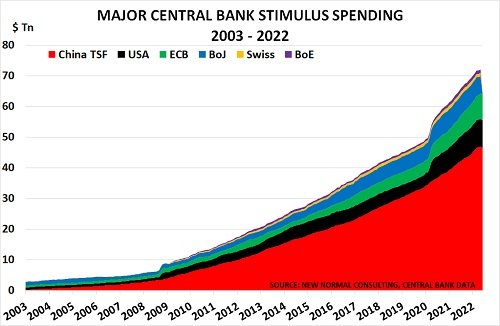 This blind belief in monetarism has had serious consequences. As the chart shows, the major central banks have run up over $70tn of debt since 2003. They chose to believe this would magically bring back inflation.

And it confirms once again the FT’s point about people running up vast debt without public accountability. 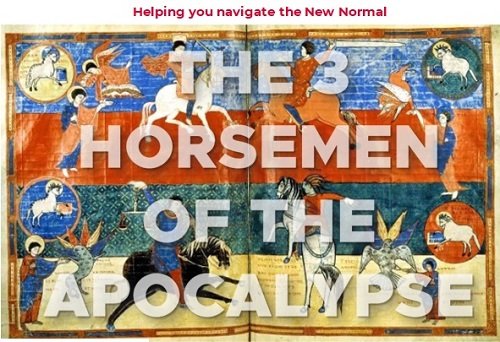 But now, as Powell and his central bank colleagues are starting to find out, too late, inflation has little to do with monetary policy.

It began with central bank stimulus programmes and then the pandemic. It is now reaching crisis point this year with geopolitics and the 3 Horsemen of the Apocalyse:

On top of this, policymakers’ belief in monetary policy has created $70tn of debt which can never be repaid.

We are facing a perfect storm of global food, energy and financial crises set off by the war in Ukraine.  Analysts need to stop focusing on monetary policy and the inversion of the yield curve. They need to look out of the window and start dealing with the geopolitical reality of Putinflation.