Skip to content
Home / ‘Watch out below!’ as supply chain chaos comes to an end

“What goes up, comes down” is usually a good motto when prices start to reach for the skies. As the great investor Bob Farrell noted in his 10 Rules, they usually go further than you think. But they don’t then correct by going sideways.

The charts showing US lumber prices, China coal prices and the Baltic Dry shipping index confirm his insight this year:

Another of Farrell’s rules is also relevant.  He suggested that corrections are much more sudden than the initial rise. And he noted that prices would end up returning to the mean.

This suggests the Baltic Dry, coal and lumber prices all have another 50% to fall.

The problem is twofold:

We can see both of these impacts taking place today. Twitter’s CEO, Jack Dorsey, has even warned of likely “hyperinflation” where consumer prices could rise 50% per month. Central banks are also starting to increase interest rates as prices rise.

The problem is that they all assume that these higher prices for key global markets are due to higher demand. But clearly, they weren’t – as otherwise prices wouldn’t have collapsed again, and so quickly. 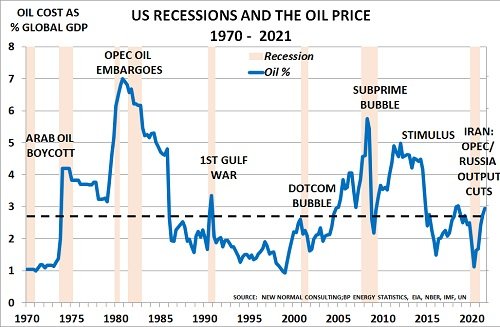 Crude oil prices are likely to follow the same path. Brent prices have risen four-fold from $20/bbl to $80/bbl since March last year.

More importantly, as the chart shows, they have risen from costing around 1% of global GDP to 3% today. Essentially, this acts as a major tax increase for consumers – who have to drive to work, act as a taxi service for the kids etc.

So consumers will naturally start to cut back their spending – just at the moment when policymakers have decided they need to raise interest rates to combat their dreaded inflation. So demand will be hit two ways:

There is why history tells us the 3% of GDP level is so critical. It has always led to a recession in the past – with just one exception. This was in the 2010s, when central banks launched their $36tn of stimulus programmes after the financial crisis.

But they are unlikely to be able to do this again. The main impact, after all, was only to create major asset price bubbles in stock and housing markets – and in obscure assets such as art markets.

Recession may therefore create a double whammy. Stock and house prices will also likely follow Farrell’s rules.  They rose a lot more than anyone expected, and are unlikely to correct by going sideways. And in the end, they will return to the historical mean.