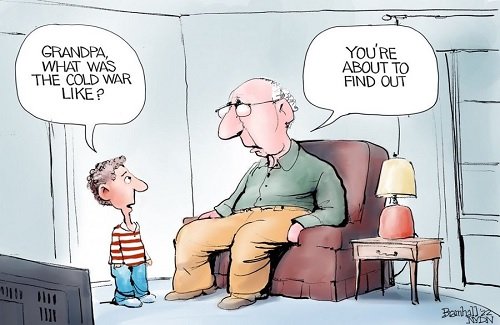 2 years ago, the world moved into a New Normal as lockdowns began in response to the pandemic. Almost immediately, major paradigm shifts began in key areas such as demand patterns. Now, Russia’s invasion of Ukraine is set to provide a major wake-up call for financial markets, as they relearn the importance of geopolitics.

As the Financial Times notes in an excellent summary of President Putin’s position by their Moscow editor, Max Seddon:

“His war in Ukraine marks the culmination of a slide into a paranoid autocracy that earns comparison with Russia’s most brutal rulers.”

Yet at the end of last week, investors were rushing to “buy the dip”, as Putin’s war began.

Most were too young to remember the reality of war – Korea, Vietnam, the Cold War.  Or the Cuban Missile Crisis in October 1962, when the world came close to nuclear annihilation.  As the Wall Street Journal headlined, they instead wanted to believe that Ukraine would surrender in Belarus over the weekend:

But wars launched by paranoid autocracies aren’t usually like video games with a defined (and quick) beginning and end. And Putin’s war has already led to unprecedented financial sanctions on Russia and its ruling oligarchs.

The problem, as an excellent new book about the US Federal Reserve, The Lords of Easy Money confirms, is that investors have come to believe “all news is good news”, even all-out war. As the WSJ adds, the rally was based on the belief that:

“The Fed will take a less aggressive path on interest-rate increases.”

This fairy-tale world ignores the chart on the left from consumer analysts Neilsen:

Instead, the investors’ world is summed up by the chart on the right:

The problem is simply that the US Federal Reserve, and other central banks, have turned financial markets upside-down since November 2010. That was when they adopted the Bernanke Theory, effectively a variation of GM’s famous claim that “What is good for markets is good for the economy”:

But reality is now set to return, with the Fed finally now pivoting to respond to rising political pressure on the need to tackle inflation.

It reached 7.5% last month and as BlackRock note, could easily reach 10%. In turn, as the two charts confirm, this means the global economy is almost certainly heading into recession:

The issue is simply that investors are in a fairy-tale state of Denial.  And so there is a growing risk of a financial crisis as reality finally dawns on them.  As then Fed Governor, Tom Hoenig, warned in 2010 when voting against Bernanke’ s stimulus policies, his Theory would likely end by creating “high unemployment, social instability and potentially years of economic malaise”.