Skip to content
Home / Electricity set to become the fuel of the future: renewables capacity will equal fossil fuels by 2026 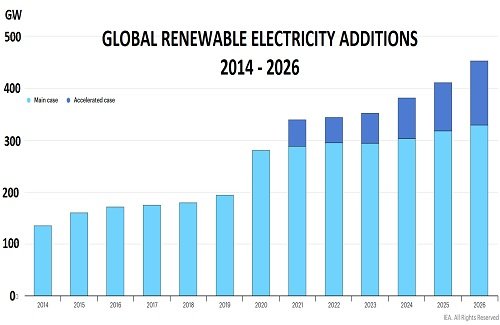 A new report from the International Energy Agency confirms that electricity is set to be the fuel of the future, powered by renewable sources. And the new German government’s decision to allocate 2% of Germany’s landmass to windfarms confirms the scale of the changes underway.

The IEA’s chart above details the expansions now planned on a year-by-year basis, and also compares with the period from 2014. Its analysis notes:

The IEA has also introduced an “Acceleration” scenario, given the current levels of growth, as China and Europe are both set to overshoot current targets:

China has set “new nearer-term targets, such as 1 200 GW of total wind and solar PV capacity by 2030. We forecast that China will reach this target four years early thanks to the availability of long-term contracts, improved grid integration, and the cost competitiveness of onshore wind and solar PV compared with coal generation in many provinces.”

Europe is similarly set to reach “the stronger targets being finalised under the “Fit for 55” programme. Rapid deployment is being driven by member countries implementing larger auction volumes, corporations contracting for more renewable electricity, and consumers continuing to install large amounts of solar panels“.

Of course, today’s supply chain crisis and OPEC’s decision to withhold 6mbd of oil production have pushed up prices for the raw materials needed to build renewables capacity. But as the IEA note, this is a double-edged sword as it has also improved the competitiveness of wind and solar power.

And importantly for consumers and governments, wind and solar power are priced on long-term contracts. Today’s oil and gas prices are forcing pensioners to choose between feeding themselves and keeping warm. But renewable prices are usually fixed for the lifetime of the contract.  And with proper back-up storage plans, supply doesn’t disappear when it is needed.

The new German government’s Net Zero plans were only announced only last week, and came too late to be included in the IEA report. But they are very ambitious, as the coalition agreement confirms:

Portugal is therefore likely to become a case study for the benefits of moving quickly to renewables. As an ICIS report highlighted earlier this year:

The shift to renewables is highly likely to have bumps along the road. But the end result is likely to be a world where electricity prices reduce, along with CO2 emissions. And consumers are no longer held to ransom by geopolitical events.