Skip to content
Home / Budgeting for the Great Reckoning 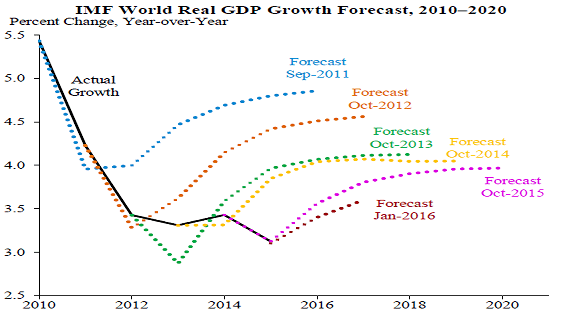 One thing is certain about the 2017 – 2019 Budget period. ”Business as usual” is the least likely Scenario to occur. The IMF chart above highlights the key issue: for the past 5 years, all its forecasts of a return to “normal” levels of growth have proved over-optimistic:

This false optimism has now created some very negative consequences:

 Companies committed to major capacity expansions during the 2011 – 2013 period, assuming demand growth would return to “normal” levels
 Policymakers committed to vast stimulus programmes, assuming that the debt would be paid off by a mixture of “normal” growth and rising inflation
 Today, this means that companies are losing pricing power as this new capacity comes online, whilst governments have found their debt is still rising in real terms

This is the Great Reckoning that now faces investors and companies as they plan their Budgets for 2017 – 2019.

Even more worrying is that most people began work after the start of the BabyBoomer-led economic SuperCycle in 1983. They have no experience of living through today’s more uncertain economic, political and social times:

 Economics. Many major countries have already seen growth disappear (Brazil and Russia of the BRIC nations)
 Politics. Populists are gaining support everywhere, as people feel failed by current political leaders
 Social. Tolerance is breaking down, particularly with regard to immigration 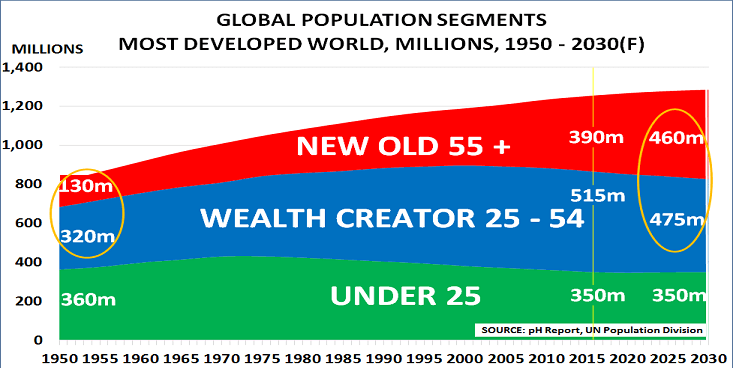 The second chart explains why the IMF have been wrong. It shows the change that has taken place in the population of the Most Developed Regions (Northern America, Europe, Australia/New Zealand and Japan) since 1950. The Regions dominate the global economy with 57% of total global GDP in 2016 ($43tn out of $75tn).

The key issue is changing demographics:

 Fertility rates. These have been below the replacement level of 2.1 babies/woman for the past 45 years
 Life expectancy. Someone aged 65 can now expect to live for another 20 years

As I noted in my Financial Times letter on Friday:

“It is good to see that the US Federal Reserve is finally beginning to address the impact of demographics on the economy, after years of denying its relevance. But its continued focus on supply-side issues means it is looking down the wrong end of the telescope… Policymakers need to urgently refocus on the demand-side implications of ageing, if they want to craft suitable policies for this New Normal world.”

The problem, of course, is that it will take years to undo the damage that has been done. Stimulus policies have created highly dangerous bubbles in many financial markets, which may well burst before too long. They have also meant it is most unlikely that governments will be able to keep their pension promises, as I warned a year ago.

Of course, it is still possible to hope that “something may turn up” to support “business as usual” Budgets. But hope is not a strategy. Today’s economic problems are already creating political and social unrest. And unfortunately, the outlook for 2017 – 2019 is that the economic, political and social landscape will become ever more uncertain.

I always prefer to be optimistic. But I fear that this is one of those occasions when it is better to plan for the worst, even whilst hoping that it might not happen. Those who took this advice in October 2007, when I suggested Budgeting for a Downturn, will not need reminding of its potential value.