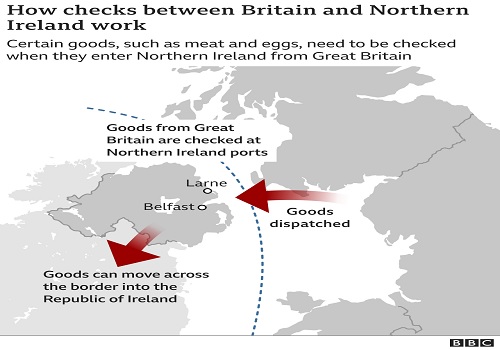 The N Ireland Protocol continues to be in the news. It was signed nearly 2 years ago, and described by UK premier Boris Johnson as being “oven-ready“.  But as the House of Lords reported last week:

“Addressing the implications for Northern Ireland and Ireland of UK withdrawal from the EU has been the most fraught, technically complex and politically divisive element of the entire Brexit process”.

The Protocol is a key part of the UK’s EU Withdrawal Act. It was agreed by the UK Parliament and endorsed in a General Election.  It created a customs and regulatory border in the Irish Sea, which the UK is legally obliged to administer under supervision from EU institutions.

Effectively, this means that inspections take place at Northern Ireland ports, and customs documents have to be filled in.

Yet back in January, the UK’s N Ireland Secretary, Brandon Lewis, claimed that “There is no ‘Irish Sea Border’“.  He has since admitted his comment “has not aged well”. But the UK government recently issued a new report effectively calling for the Protocol to be renegotiated.

The issue is that the “grace period” for the detailed new rules to apply will end on 30 September. Time is therefore starting to run out for the problems to be resolved.  And there appear to be only 3 likely options:

There are 2 main reasons why the UK may end up accepting this outcome:

That said, there is no doubt that this option will be difficult to finalise, given the volatile nature of internal Conservative Party politics.

It was these, after all, in the shape of Johnson’s bid to replace Theresa May as premier, that killed her ‘backstop’ agreement. It had been expressly designed to avoid all the issues created by the Protocol.

So one cannot rule out the risk that the introduction of the UK’s own border controls from 1 October – or even an unrelated issue such as vaccine passports – could lead to the UK invoking Article 16, and effectively ‘pulling the plug’ on the Protocol.

In turn, of course, this would also create the risk of a wider trade war developing with the EU, as well as a highly-charged confrontation in the courts.

It is always very difficult to plan for political uncertainty. There is probably only a 10%-20% chance today that the UK will pull the plug on the Protocol. But the impact of a decision to invoke Article 16 could be enormous, if it proved the spark for a UK-EU trade war.