Investors don’t ask many questions when markets are in their ‘Excitement‘ phase. And it’s too late to ask when they move into ‘Convulsion’ mode, and major darlings of the high-flying years start to go bankrupt.

“Brent futures prices have risen by more than 80% over the last two months, the fastest increase at any point for more than a quarter of a century, as the market has rebounded from its worst crisis in decades.”

It therefore seems increasingly likely that the market is now moving beyond the recovery and peak phases shown in the chart, towards breakdown and slump.  H1 saw a complete cycle more or less completed, and so it would be no surprise if markets continue to accelerate.

It is also now clear that Q2’s buying binge was due to stock-building rather than a return of demand:

And, of course, non-OPEC+ producers are raising output again, with prices at $40/bbl. Last week’s Dallas Fed survey showed more than a third of US shale producers were restarting production by the end of June, and a further 20% would be restarting in July.

Unless demand suddenly recovers, prices will come under increasing pressure in coming weeks. 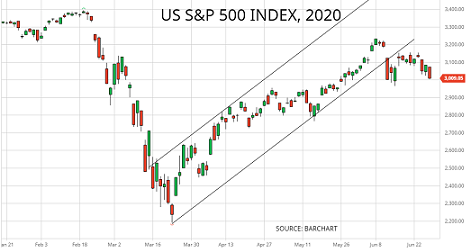 But as the chart confirms, it looks as though prices are set to weaken again. They soared upwards after bottoming at 2190 on March 23, as traders assumed the combination of Federal Reserve support and the waves of buying from millions of Robinhood investors would lead to a V-shaped recovery.

But Wirecard’s major bankruptcy last week, as we discuss below, may well be a signal that – as in 2000 with Enron and WorldCom – markets may now discover that some of their high-flying stocks have feet of clay. 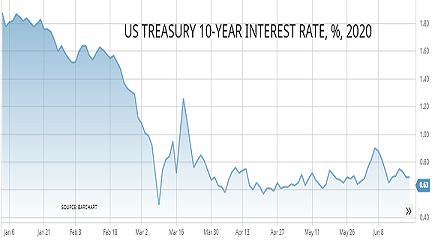 Interest rates are also weakening as hopes of a V-shaped recovery fade, as the chart confirms. The 10-year rate tried yet again to rally higher, but closed the week down by 0.06% at 0.63% – giving up all its gains since 14 May.

Since the start of the crisis, central banks have assumed that liquidity is the same as solvency. But, of course, it isn’t:

Since March, the US Federal Reserve has effectively pushed out $3tn to the market to boost liquidity. Unsurprisingly, stocks have rallied like a rocket. But as Charles Schwab warn:

“Over past few years, stock markets generally increased (albeit on choppy path) with profit margin estimates… at present, along with earnings, margins are expected to collapse while stocks have gone other way”.

Equally worrying, as the second chart shows, is that around 1/5th of US firms are effectively zombies – unable to even pay debt servicing costs out of profits. And many large companies with >500 employees have already gone bankrupt, as Forbes list.

Last week, Germany began to worry about solvency for the first time. One of its top 30 companies, the Softbank-backed fintech company Wirecard “suddenly” revealed that $2bn was missing was from its accounts. And its market value crashed from €13bn to just €500m as its CEO was arrested.

As investor Warren Buffett noted long ago, “You only discover who’s been swimming naked when the tide goes out“.