$tns of central bank stimulus meant financial markets had a wonderful Q2, even though the global economy collapsed. But can they continue to blow up the bubble, if the promised V-shaped recovery now fails to appear? 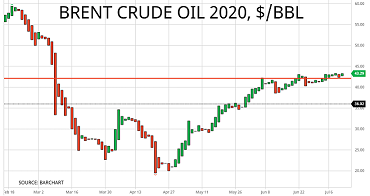 Prices were supported through Q2 by massive stock-building in key importing countries including China and India. Refiners were also taking advantage of the low prices to make “cheap” gasoline and other products, in anticipation of a quick rebound in demand by the summer.

But China/India’s strategic storage is now full, as we noted last week. And refiners are being forced to cut back their operations due to oversupply of key products, as Reuters notes:

“Refinery margins for making middle distillates such as gasoil and jet fuel have plunged to their lowest since 2009 as lockdowns and recession have cut fuel consumption by millions of barrels per day.”

Similarly, the International Energy Agency warns in its latest Report:

There was always going to be a rebound from the 16.4mbd collapse in oil demand during Q2. But it is becoming harder and harder to share the oil bulls’ conviction that a V-shaped recovery in demand is already underway. 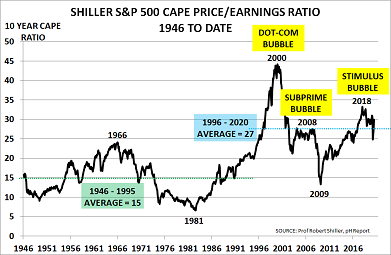 The market continued to bounce around last week, adding 50 points overall to reach 3185. But in reality, the market has been trading in a range for the past month:

The chart showing Prof Robert Shiller’s Cyclically Adjusted Price/Earnings ratio (CAPE) since 1946 confirms the extreme nature of the current rally. The CAPE ratio is the basic building block of stock market valuation, and the chart highlights the unusual nature of the period since 1995, when the CAPE ratio hit 20x for the first time since 1966:

This confirms the impact of the 3 major central bank stimulus programmes in supporting asset markets at the expense of the real economy – first there was the dotcom bubble, then the subprime bubble and now we are living through the stimulus bubble.

The problem is that these have led to a massive expansion of debt – which is now higher than the peaks seen during World War 2. Companies have loaded up on debt to boost shareholder returns – and now many are facing bankruptcy as a result of the collapse in demand.

Unfortunately, this pressure will likely get worse over the next decade, as growth in the global population will be increasingly dominated by the Perennials 55+ generation, as we discuss below.

This highlights the underlying contradiction in market behaviour:

Essentially, therefore, we would then need to assume that the IMF’s decade-long depression scenario had arrived, and that deflation would become embedded in the economy. 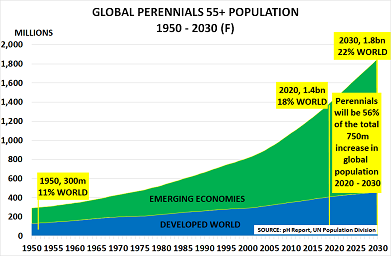 Global life expectancy has more than doubled over the past 100 years, whilst fertility rates have more than halved.  Fertility rates in many parts of the world have also been below replacement levels since the end of the BabyBoom in 1970

The chart highlights the unique change now underway in the global population:

This has enormous implications for growth. The issue is that Perennials already own most of what they need, and their incomes decline as they enter retirement. In turn, this is a key reason why a return to ‘business as usual’ is almost impossible.