Volatility has spiked this month, as always happens when markets go through a period of major change. Time seems to speed up, as old certainties are discarded, and everyone tries to work out where we are headed next. 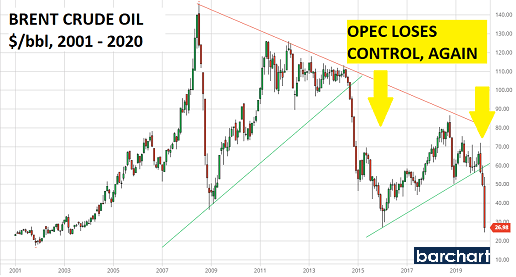 It is the other major example of where a key player – in this case, the OPEC cartel – has lost control of the market. This is no great surprise, as prices have tumbled many times since the cartel was formed in 1960. The reason is simple:

Oil has always been a ‘boom and bust’ market, and this time seems to be no exception.

During the boom stage, producers ignored the fact that the median oil price since 1961 has been $24/bbl ($2019). Instead, they were fooled by the expensive delusion that “this time is different”. Long-term investors know, however, that reversion to the mean is normally the most profitable strategy.

The consequence of this ‘bust’ are likely to be profound. Not only will many producers, and producing countries, go bankrupt. But also, down the value chains, many companies have been caught out by the speed of the decline, and are now sitting on inventory based on $50/bbl oil.

Q2 is therefore likely to see major destocking, further depressing demand in the short-term. And as oil tanks are already nearly full, we may even see producers paying buyers to take oil from them – effectively splitting the savings from not having to pay to store it. 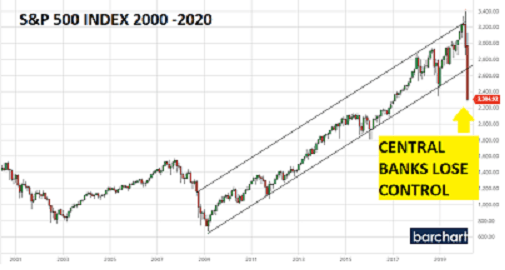 The market closed Friday at 2304. Its volatility this month has also been astonishing – a high of 3136 and a low of 2280. We expect this volatility to continue.

The key issue is that investors came to assume that central banks would never let them fall after then US Federal Reserve Chairman, Ben Bernanke, wrote in 2010, that

Unfortunately, the central banks believed that rising stock markets would deliver economic growth. And so as the chart shows, they therefore rushed to provide extra support – in the shape of stimulus cash and interest rate reductions – every time the Index showed signs of falling out of its tram-lines.

This, of course, also encouraged investors to ‘buy on the dips. And many are still doing this every day, not wanting to believe that the central banks have lost control.

However, today’s volatility shows that markets are therefore starting to rediscover their key role of price discovery. We fear this will be a very painful process:

The result is that investors are refocusing on ‘return of capital’ instead of ‘return on capital’. In turn, companies are starting to recognise that having cash in the bank for a rainy day has become essential, now that the asset bubbles created by the central banks are bursting. 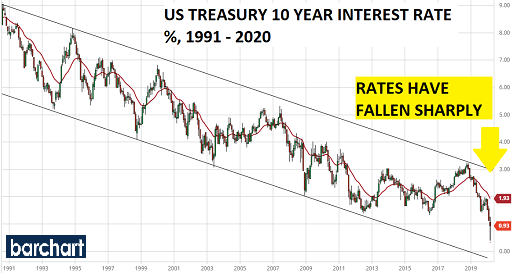 The market closed on Friday yielding 0.93%. Its volatility this month has been astonishing – a high of 1.36%, and a low of 0.39%. We expect this volatility to continue.

One reason for this is that it is the world’s ‘safe asset’. Liquidity is low in global markets and although ‘buy-sell’ prices are shown on the screens, buyers disappear when large volumes are offered. So people who need to raise cash quickly have to sell their Treasury holdings.

As the chart shows, the yield has been making new lows for 30 years. Its dramatic current movements suggest a really major change is now underway – from inflation to deflation,  as we discuss below.

We also expect volatility to remain high and further reduce liquidity. Even the best traders tire of being ‘whipsawed’ on a day-to-day basis – and the bad or unlucky ones end up going bankrupt. 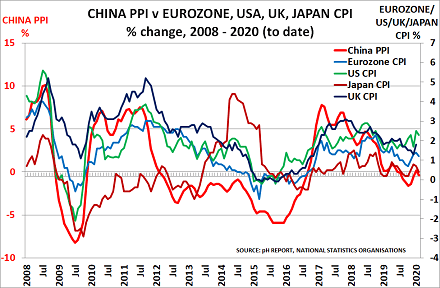 We focus on China’s Producer Price Index (PPI) and consumer prices in the main economies (CPI).

China’s PPI is important due to its role as the ‘manufacturing capital of the world’. The PPI was negative at -0.4% in February, and it is likely that CPIs will soon turn negative as the collapse of the oil price – and consequent destocking – feeds through into lower prices. The reason is two-fold:

We believe that the sudden and sharp drop in interest rates is confirming this move into deflation. Thousands of companies are being closed down, and millions of people are losing their jobs. And the lockdowns make it difficult for consumers to buy most non-essential items.

Central banks and governments are probably powerless to prevent this move into deflation, The reason is that  their stimulus policies have created record levels of debt – around $32500/person in the world. And debt is deflationary by its nature, as it ‘borrows’ demand from the future.

This downside adds to the ‘demographic deficit’ created by today’s ageing populations – older people already own most of what they need, and their incomes decline as they retire.