Traders in financial markets have had a fabulous month. $tns of free cash from the central banks to play with. And vast numbers of private investors hanging on their every word. What could possibly go wrong? 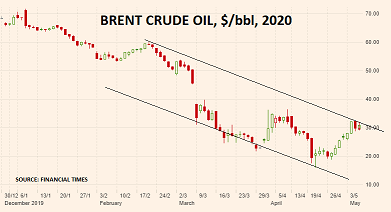 The market closed Friday at $30.97/bbl, a second consecutive rise of $5/bbl on the week.

It highlights how speculative investors are always very slow to give up on a simple story. They love a clear narrative with an easily understood conclusion. And their eyes close if they hear boring analysis about supply/demand balances and geo-politics.

Luckily for them, there are plenty of people to provide what they want. Oil producers are desperate for prices to rise. And experienced traders love the idea of taking prices in one direction – and then making money from taking them in the other direction. Their current “story” is therefore very powerful:

Traders have no doubt made good money from front-running this rally. But now it is reaching a critical test, as prices need to rise above the $36/bbl seen at the beginning of April, before prices crashed. Otherwise, as the chart shows, the market will simply have been trading in tramlines – after which the next move will be to test the previous low.

So the next fortnight will see whether the cutbacks in supply and recovery in demand are real. The US EIA and the IEA will release their monthly Reports, along with OPEC. And the hedge fund traders will have a chance to decide whether it is time to reposition for a new move.

Saudi Arabia’s decision to offer its crude to Asian buyers at $5.90/bbl below the benchmark level in June suggests there may well be another innings still to come in the price war. And the US still needs to find a home for majority of the 43mb of Saudi oil due to arrive between 24 April and 24 May. 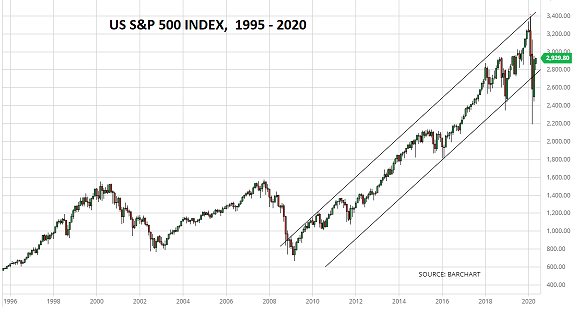 The market closed Friday at 2929, up nearly 100 points on the week, at the same time that official US data revealed 20.5m Americans lost their jobs in April – taking the unemployment level to a post-Depression record.

Essentially, though, it spent the week recovering the points lost on the previous Friday. And it is still trading within the tramlines that the US Federal Reserve established after the Crisis, based on the 2010 analysis set out by Fed Chairman, Ben Bernanke, that:

In reality, of course, the main impact has instead been to widen social inequality, given that only 55% of Americans actually own stocks. As pollsters Gallup report:

“U.S. stock ownership remains below where it was before the financial crisis in the fall of 2008, with declines since then evident among most major subgroups of the population. Adults aged 65 and older and those with an annual household income of $100,000 or more are two groups whose ownership rates have held firm.” (Our emphasis).

It seems likely that the divide will be even greater the next time Gallup ask the question in their poll. But in the meantime, the Boomers and the highly paid are doing well – and remain confident that “the Fed will never let stock prices fall”.

As with oil prices, it’s all good news for the hedge funds, who can make guaranteed profits as long as the Fed doesn’t disappoint.

One expects this type of volatility with ‘penny stocks’ being swung around on small trading volumes by their aficionados. But the US 10-year bond is the benchmark for the world’s financial markets. So questions abounded as to what was happening:

Our thought is that volatility has been the name of the game since we launched this pH Outlook Briefing on 21 March under the title “Volatility highlights rising uncertainty“. And for the moment, we see no reason to change that judgement. 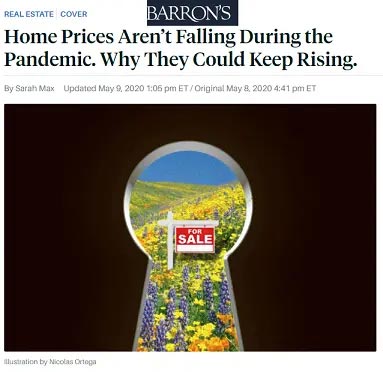 Who can forget, for example, the infamous Business Week cover The Death of Equities? Written in 1979, just before the stock began its 40-year ascent, it captured consensus thinking at the time:

“For better or for worse, the US economy probably has to regard the death of equities as near-permanent condition—reversible someday, but not soon.”

Unfortunately for Business Week, a $10k investment made that week would have turned into $830k 40 years later – and it would still have been worth $215k allowing for inflation.

The story highlights the power of consensus thinking, and its fascination with looking backwards to project the future. Yet if there is one thing we know, it is that the future is usually different from the past.

We suspect the above cover from leading US financial magazine, Barron’s, may mark a similar moment, highlighting the complacency surrounding house prices.

Sadly for the editors the cover appeared just a day after Realtor.com reported that home prices fell during April in 47 of the 50 largest metro areas – and the impact of the pandemic is probably still in its early days.