US stock markets are riding high, with valuations in the 95th percentile since 1881. But the US economy is in trouble, with growth expected to be in the 4th percentile. 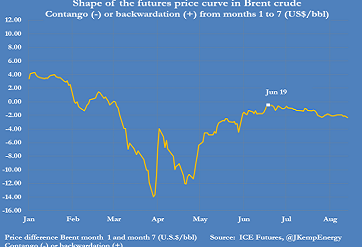 The market crept up a further 40c/bbl on the week to close at $44.84, but was again unable to regain the ‘flag shape‘ highlighted earlier this month. And as the chart from Reuters shows:

“We reduce our 2020 forecast by 140 kb/d, the first downgrade in several months, reflecting the stalling of mobility as the number of Covid-19 cases remains high, and weakness in the aviation sector”.

The autumn is a traditionally weak period for oil markets, and it looks as though 2020 will be no exception. 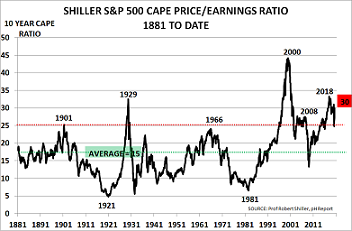 The market rose 21 points last week to 3372, again failing to make a new all-time closing high. It’s problem is highlighted in the chart from Nobel Prizewinner Prof Robert Shiller. This measures the price/earnings ratio over a 10-year period, to remove short-term wobbles up or down:

Yet as respected analyst James Montier of GMO notes:

This is not to say the market can’t move higher in the short-term, given the stimulus support being provided by central banks. But it does suggest that we are much nearer the top than the bottom of the recent rally. 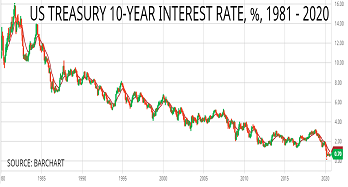 The reason was that the US Treasury decided it needed to sell a record $112bn of debt, including $38bn of 10-year debt during the week. This was most unusual, as liquidity is always low in August with most senior traders on the beach. But they clearly decided to stop building sandcastles for a moment, given the opportunity for an outsized profit.

Their carefully-timed selling ahead of the auctions drove yields higher and prices lower (bond prices are the inverse of yields). And now they can sit back in their deckchairs and wait for yields to fall again.

In due course, they will then be able to sell at a handsome profit, and bank their Christmas bonuses. Nothing, after all, has changed in the economy over the past week to justify such a large move in bond prices.

There was a time, as the Refinitiv chart shows, when investors were genuinely investors. Average holding times used to be 8 years, when fundamentals such as earnings and management ability used to matter:

The holding period dropped still further to just 5 months this year, as the RobinHood traders bet their furlough money on worthless stocks like Hertz instead of sports.

Wall St hasn’t yet woken up to the fact that the furlough money has now stopped – and with it the funding for the 20%-25% of trading being done by the RobinHood bettors. Nor, as Montier warns, has it noticed that US economic growth this year is expected to be the weakest 4th percentile since 1881.