The Hertz bankruptcy will shatter investors’ dream of a V-shaped recovery. Instead, they will likely start to realise deflation is just around the corner, as non-essential consumer demand disappears. 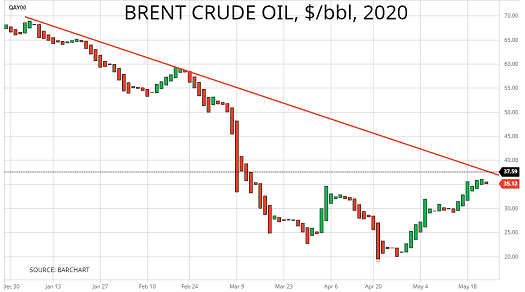 The market closed Friday at $35.13/bbl, a rise of $2.30/bbl on the week, amid great excitement  over the expectation of a major recovery in gasoline demand over the Memorial Day weekend

But Tom-Tom real-time traffic data on Sunday morning shows little sign of this taking place in the 5 largest cities:

Meanwhile, of course, on the supply side, today’s higher prices make it possible for many producers to hedge their production profitably again. And support from the futures market may well be reduced as Bloomberg reported that: 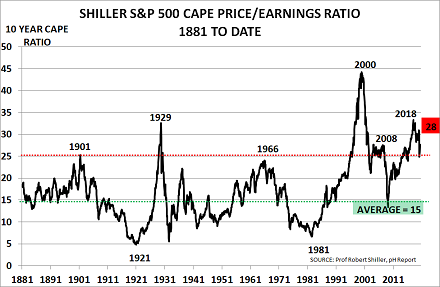 The market closed Friday at 2955, recapturing its losses of the previous week. In turn, this highlights the continued divergence of financial markets from the real economy.

US jobless claims have totalled 39m over the past 9 weeks.  But as the chart shows, the Shiller CAPE Index remains higher than its peak in 2008:

The question, of course, is whether Prices are temporarily too high, or Earnings temporarily low and about to rapidly recover?

Wall Street has preferred to believe the former, and proposed the idea of a V-shaped recovery. It seems millions of Americans, particularly those earning $35k-$75k, have bought into this idea, and used their $1200 stimulus checks to boost their stock market trading by 90%.

But that didn’t stop 102-year old Hertz Rental from filing for Chapter 11 bankruptcy protection for its US business on Friday night. The key issue is that liquidity isn’t the same as solvency.

The collapse of air travel means that Hertz has virtually no customers and nearly 700k rental cars sitting idle on its airline parking lots. And due to the Fed’s easy lending policies, it also has $19bn of debt, which probably can’t ever be repaid.

It has already laid off 10k of its 29k US worksforce, who will also now have much less money to spend. Plus, rental sales are around 20% of US auto sales, so the whole supply chain will also feel the pain. 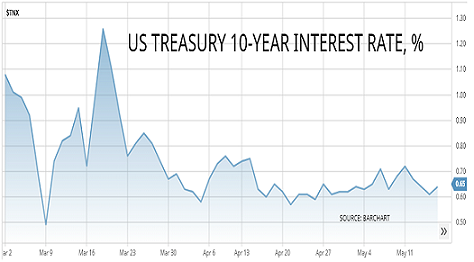 The rate closed Friday at 0.65%, after another wild ride as investors first decided that recovery and inflation were just around the corner, and then began to worry they might be wrong:

In turn, this volatility highlights the massive uncertainty in the markets. Investors would like to believe that business as usual is just around the corner, but many are increasingly worried that instead we may be heading into a New Normal of deflation. 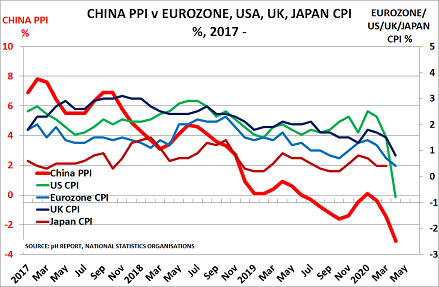 Our fears over the likely approach of deflation were further confirmed by April’s data.  As the chart shows:

The Hertz bankruptcy confirms consumers are refocusing on the essential. We therefore continue to expect deflation to impact the major economies during Q2.  Companies hoping to sell non-essential items are likely to have a hard time, particularly if their balance sheet is piled high with debt.