Markets ignored our forecast of a Donald Trump win in 2016. And now they are ignoring the risk that he might not accept the result, if he loses in November. 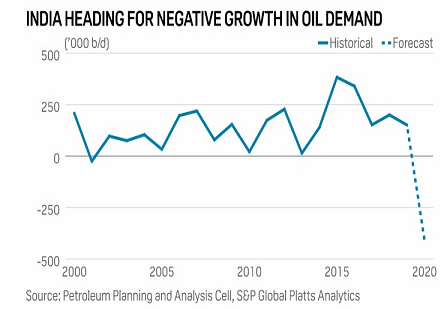 The rise, as often in recent weeks, was due to the quantitative traders. Their algorithms have no interest in the fundamentals of supply and demand. Instead they focused on news of a drop in US inventories. But in reality, demand growth is stalling in key markets around the world, such as India:

Another sign of demand weakness is that refining margins are now at their lowest levels for 20 years, due to the collapse in global demand for distillates and jet fuel. And as Reuters notes, “supplies are expected to remain ample for the foreseeable future.” 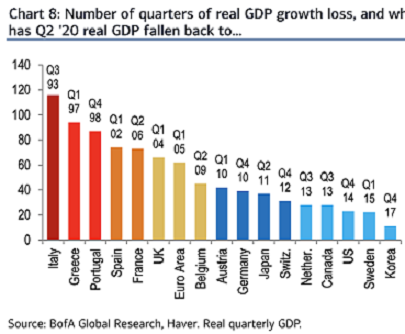 The market rose 80 points last week to 3351, almost back to its pre-Covid peak of 3393 in February. As we have noted before, this is entirely due to the Famous Five stocks – Amazon, Apple, Google, Microsoft and Facebook.  The broader market has been going nowhere for the past 3 years.

Central bank stimulus has provided the cash to support the Famous Five, but now attention is turning to the actual state of the global economy. The Bank of England had to admit last week that its promised V-shaped recovery was likely to be delayed until at least the end of next year. And as the chart shows, that is still a very optimistic forecast:

Interestingly, even the IMF is now starting to discuss our core argument for the past few years, that today’s ageing populations mean stimulus is unlikely to produce the expected growth:

“Population aging is posing significant challenges to policymakers…(and) other economic policies (including structural reforms) would need to play a more important role in supporting domestic demand.”

The rate rallied slightly last week to 0.56%. But as the chart shows, the rate continues to make “lower lows, and lower highs”. In other words, it is a like a rubber ball bouncing down the stairs – it never manages to bounce back to the higher step again.

This is no real surprise. As we have noted before, bond investors tend to be more realistic about the economic outlook than equity or commodity investors.  They are also more worried about deflation than inflation.

We were one of the few analysts to consistently forecast that Donald Trump would win the Presidency in 2016. We also correctly forecast that he would reverse 50+ years of US policy consensus.  But companies and investors turned a blind eye and so were “astonished” when he abandoned President Kennedy’s policy of global leadership, and withdrew from the Paris Climate Change agreement, NAFTA and the Trans-Pacific Partnership.

The chart above from Real Clear Politics was the basis for our forecast. It showed that most Americans were unhappy with the status quo, and so were very unlikely to elect a ‘continuity candidate’ such as Hillary Clinton:

As the adage says, “oppositions don’t win elections, governments lose them”.  This time round, Trump is the government, not the opposition. We therefore expect him to lose to Joe Biden in November and become a one-term President.  The question is then “What would happen next“?

Would he accept the result, knowing that he potentially faces serious criminal charges once he loses his Presidential immunity?  Or would he attempt to cling to office?

Companies and investors need to focus on this issue now, unless they want to be caught out, again.