Markets are starting to resemble the Road Runner cartoons.  Mr. Coyote used to run off cliffs and take several steps on thin air before noticing that there was nothing underneath his feet. Only then would he plunge. 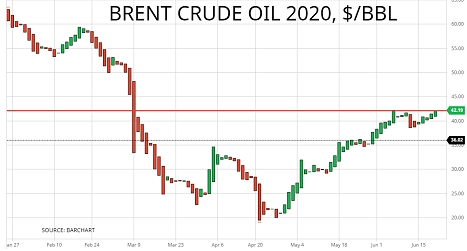 The market closed Friday up $3.50/bbl at $42.19, retracing the previous fall but also highlighting its loss of momentum, as the chart shows:

This confirms the risks ahead as we move into Q3.  Traders would love to believe that the OPEC+ group will stick to their quotas and keep supply limited. But in reality, OPEC+  have conflicting objectives:

We have therefore reached the stage when reality rather than sentiment will start to dominate. Will demand really pick up in Q3?  If it does, then prices could easily move back to the $50/bbl level, with the ‘recession’ over.

But this seems unlikely with US Federal Reserve Governor Neel Kashkari warning on Friday:

“The recovery will take longer than we had hoped only a few months ago. Many jobs are going to take a long time to come back.” 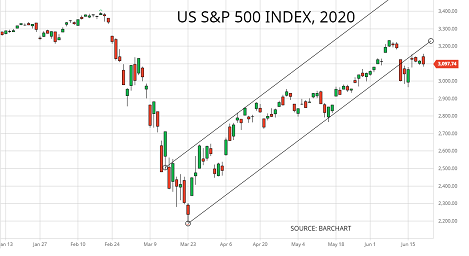 The market closed Friday at 3097, up 50 points over the week, and consolidating its position above the psychologically important 3000 level.

But the chart confirms that, as with oil, markets have essentially been treading water this month. They rallied very sharply from their March lows around 2200 as the stimulus programme kicked in and the millions of new RobinHood traders ‘invested’ their stimulus cheques in stocks like Hertz and Chesapeake, based on their apparent low prices.

But Hertz has already filed for Chapter 11, and Reuters has reported that Chesapeake is close to doing the same. So cold reality is now starting to hit home, as the excitement of seemingly easy gains disappears.

And can the market really push on and make new highs with the IMF forecasting the world is facing “the worst economic downturn since the Depression”, and Germany’s Chancellor Merkel suggesting “Europe faces very, very difficult times and fearing that the gravity of the situation is not well understood”.

As with oil markets, the issue comes back to the outlook for demand. As we move into Q3, investors will likely learn whether this has been one of those markets where “it is better to travel in hope, than to arrive”.

Interest rates are telling a similar tale of caution as the chart confirms. The 10-year rate tried once again to rally higher, but closed the week back at 0.69% again.

The issue is that interest rates should move higher again if the economy is really getting back to ‘business as usual’. But instead, all 3 markets are in cautious mode, unwilling to break out further without clear evidence that real improvement is underway.

The opposite in fact seems more likely. 400k sailors have been stranded on board ship since the Covid-19 pandemic began, for example. Many are now over the legal maximum of 11 months at sea as a result, and the emergency rules allowing this extension expired on 16 June.  80% of world trade moves by ship, and so it seems inevitable that H2 will see major disruption.

We therefore continue to expect deflation rather than inflation as we move into H2. 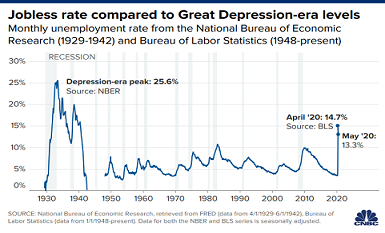 In the end, demand depends on people having jobs and earning money that they are able to spend. And so the risks are rising as the furloughs end

The UK, for example, currently has 9m people people being paid by the government – a quarter of the workforce –  and the schemes start to wind down in July.

In the US, as the chart shows, US joblessness is at its worst level since the Depression. But the pain is not spread equally as CNBC confirm:

Unemployment rates for White workers are at 12.4%, Black workers are at 16.8%, whilst Hispanics and Latinos are at 17.6%.  This differential matters, as latest Census Bureau data shows Whites are 60% of the US population, with Blacks 13% and Hispanics 18%.

Social unrest is already rising in the US with the Black Lives Matter protests.  It could be a long hot summer.