June chemicals data showed only a small uptick. And downside risks for Q3 are rising, as China is hit by flooding and the US has so far failed to renew its $600/week furlough payments and eviction protection. 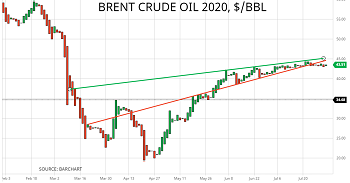 The market closed at $43.51, virtually unchanged for the third successive week.

Importantly, as the chart shows, prices have now fallen out of the ‘flag shape’. The bulls have kept trying to push them higher, but have reached a stalemate with the bears, So now we should assume that hedge funds will start to probe the downside risk.

China’s floods add to the risks. It is the world’s largest importer of crude oil. And its storage tanks are already full after its bargain-basement buying in March/April, as we have noted before. The issue is the impact of weeks of above-average rainfall on the Yangtze and other major rivers, as the South China Morning Post warned at the weekend

“China is facing a huge flood risk this summer, for complex reasons not just focused on the Three Gorges Dam. Indeed, it has played its part against the floods. But it is unrealistic to expect one dam, no matter how big, to resolve floods of this scale.”

In 2009, China led the world into recovery with its massive stimulus programme.  It can’t afford to repeat that level of spending today.  And the flooding can only add to the problems still being caused by the pandemic. 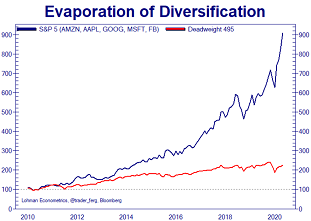 The market rose 50 points last week to 3271, and continues to plateau.

The chart updates last week’s analysis to give a longer-term view of the S&P’s extraordinary dependence on just 5 stocks – Amazon, Apple, Google, Microsoft and Facebook. It shows that the broader market has been going nowhere for the past 3 years:

Nobody knows when the “blow-off” will start to implode.  But the risks are certainly rising, with US Q2 GDP down by nearly a third on an annualised basis. And Congress’ failure to renew the $600/week furlough payments will reduce the firepower available to the RobinHood traders.

They have recently accounted for around a fifth of stock market volume, and up to a quarter on busy days. Kodak’s share price movement showed their impact again last week, with the price rising nearly 1500% (not a typo) on news it had taken a $765m Federal loan to manufacture ingredients for generic drugs.

Only 10k RobinHood accounts owned the share on Monday, but another 107k had joined the party by Wednesday. Of course, we can all hope that Kodak will make a success of the new venture. But most genuine investors would first wait to see the plant being built and regulatory challenges being met. 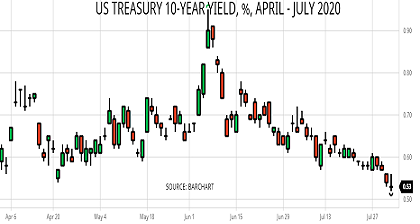 The rate fell again last week to a record closing low of 0.53%, as the chart shows.

This confirms that bond market investors are not buying the Fed’s story of a V-shaped recovery. Instead, they see the Fed’s stimulus as simply helping to keep more and more ‘zombie companies’ alive. These are businesses that can’t make enough profit to cover even their interest bills.  As the US National Bureau of Economic Research warn is a new analysis:

“We show that cheap credit to impaired firms has a disinflationary effect. By helping distressed firms to stay afloat, “zombie credit” can create excess production capacity, and in turn, put downward pressure on mark-ups and prices.”

With demand already sliding due to the pandemic, the potential for US rates to go negative seems likely to increase in coming weeks. 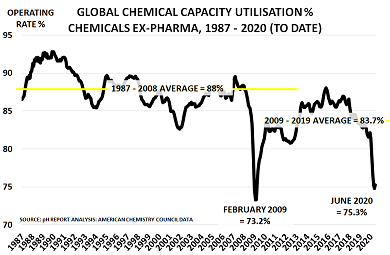 Chemicals is the third largest industry in the world, after agriculture and energy. Chemicals are also used in every country, and in vast numbers of applications. Unsurprisingly, therefore, it is the best leading indicator for the global economy.

Their other great advantage is that Capacity Utilisation (CU%) data is available in almost real time from the American Chemistry Council, as the chart shows:

It is hard to be very optimistic about the outlook, if chemicals demand remains weak.