Financial markets have sharply diverged from events in the real world over the past month, as central banks ramp up their efforts to stimulate “animal spirits”. May will likely tell us if this divergence can be sustained.

This dramatic rise was based on a belief that the US and global economies are now returning to “normal”. Speculators therefore began to focus on the potential for a major boost to US gasoline demand from the Memorial Day public holiday at the end of May, which traditionally marks the start of the driving season. But in the real world:

Speculators also seized on the news that gasoline stocks had fallen by 3mb over the past week. But such a fall is perfectly normal at this time of year, as gasoline moves out of refineries to meet expected demand from motorists at the service stations.

A more relevant figure is the collapse in refinery runs, which are currently at the lowest level since 2008. Unless these improve dramatically, storage risks being further swamped by the record number of oil tankers already en route to the US, as Rystad Energy note:

“28 tankers with Saudi oil, including 14 VLCCs and carrying a total of 43mb, will arrive on the US Gulf and West coasts between 24 April and 24 May. The Saudi fleet, with oil loaded at Ras Tanura, will join an existing congestion of 76 tankers that are currently waiting to unload in US ports. Most of these tankers are on the West Coast, where 34 tankers are waiting in line to offload about 25mb of crude. In addition, about 31 tankers, carrying a similar load, are waiting for a slot to unload on the US Gulf Coast.”

This US Naval Institute video shows the picture off the West Coast – something unprecedented, according to local experts.

The next few weeks are therefore likely to to severely test the speculators’ confidence that a V-shaped recovery is now underway. 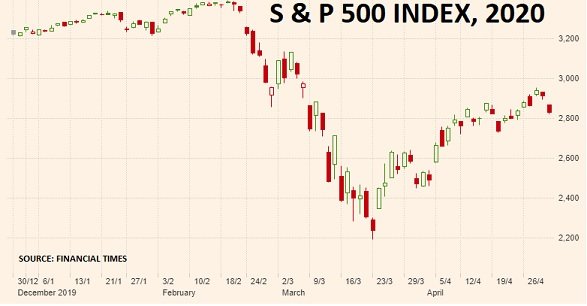 The market closed Friday at 2831, virtually unchanged on the week, after a major tumble on Friday. Earlier in the week, the speculators had been out in force, once again cheering the news that Gilead’s remdesivir might prove a ‘wonder drug’ capable of treating Covid-19 patients.

Their enthusiasm is supported, of course, by the US Federal Reserve’s decision to vastly expand its balance sheet in order to support Wall Street through the crisis. Its lending has already reached $6tn, and many observers believe it could reach $10tn before too long. The aim, as always, is to provide liquidity to enable markets to operate. But there is a worrying disconnect between the Fed’s differing response to Wall Street and to Main Street, as the Wall Street Journal notes:

“The Federal Reserve on Thursday rolled out revised terms for its Main Street Lending Program, and we wonder why it bothered. The details suggest the Fed and Treasury would rather not have anyone use the facility.”

The Fed’s trillions have to go somewhere when they are lent out, and so it is not surprising we saw a sharp rally in the markets last month. In turn, of course, this encouraged the belief that a V-shaped recovery was now underway.

We would, of course, love this to be the case. But unless the real economy receives the same kind of urgent assistance, we worry that the rally may quickly run out of fuel. President Trump’s decision to consider upping the stakes on his China trade war only highlights the range of risks ahead.

The rate closed Friday at 0.64%, for its first weekly increase since the beginning of March.  This confirms the rising optimism in financial markets about the prospect of an imminent rebound in demand, which would logically lead to a rise in interest rates.

Confirmation of this trend would require rates to rise much higher in coming weeks.  As the chart confirms, they have fallen a long way since the crisis began. And they have certainly not yet responded to anything like the same extent as the S&P 500 – confirming our concerns that Main Street is currently being left behind. 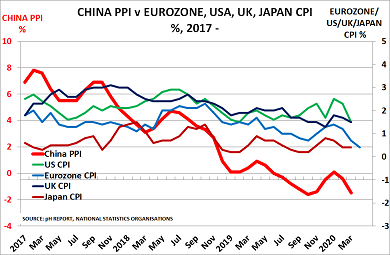 We focus on China’s Producer Price Index (PPI) and consumer prices in the main economies (CPI).

This month’s update highlights the continuing decline in China’s PPI and the parallel decline in major economy CPIs. The data mainly covers March, and so doesn’t reflect the full impact of the oil price collapse, or the lockdowns outside China.

China’s PPI will inevitably depress prices for manufactured goods during Q2, due to its role as the ‘manufacturing capital of the world. Consumer prices are also likely to be impacted by the sudden drop in demand caused by the lockdowns. The provisional EU CPI hints at this impact, having fallen from 1.2% to February to just 0.4% last month.

Our concern is simply that if inflation turns into deflation as a result of the crisis, this will increase the risks created by today’s debt mountains. Deflation increases the real cost of debt over time. It also encourages people to postpone non-essential purchases on the basis that they will cost less in the future, and so creates a further headwind for economic growth.

As always, we welcome your comments at info@thephreport.com