Experienced investors have always claimed the bull market wouldn’t end until new retail investors rushed to join it. The 3 million new accounts on the RobinHood share-trading platform suggest they may be right.

The market closed Friday down $3.50/bbl at $38.74/bbl, as traders began to worry about the rise in global inventory.

US inventories continue to rise, reaching a record 2.1bn barrels last week. And as the chart shows, part of the reason is the arrival of the Saudi imports that we have been tracking over the past few weeks. These have now averaged 1.5mb/day for 3 weeks, for a total of 32mb.

This US data confirms the extraordinary volume of oil in floating storage and in transit, at over 1.3bn barrels. This represents nearly 15 days of global demand even at the pre-Covid rate of consumption, highlighting the volume that will need to be worked off in H2.

And, of course, the world is nowhere close to returning to previous levels of consumption. Jet fuel is worst hit as most planes remain parked around the world, and distillate demand from industry remains weak. US railcar data is a good proxy for this demand, and remains down by 16% versus last year, despite the upturn from its recent lows.

Even the normally bullish Barclays commodities team only expects prices to stabilise at current levels in Q3:

“The pace of recovery in prices is likely to slow down, in our view, as the steepest decline in supply and the fastest improvement in demand is likely behind us.” 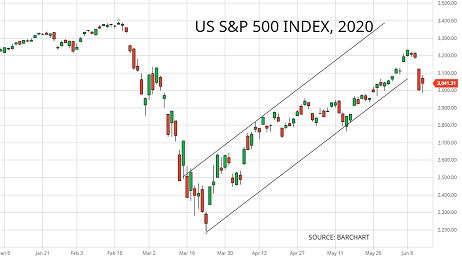 The market closed Friday at 3041, down 150 points over the week, although Friday’s rally meant it managed to hold onto the psychologically important 3000 level. The trigger for the decline was two-fold:

US investors are also becoming concerned that the re-openings of the economy may lead to a surge in new Covid-19 cases.

The cause was a warning from the US’s leading infectious disease expert, Dr Anthony Fauci, that much was still unknown about the virus. He also emphasised it is particularly dangerous for those with “higher rates of underlying conditions like diabetes, high blood pressure, obesity and chronic lung disease”.

Investors would clearly like to believe that all the risks are in the past, and that the sunlit uplands of a V-shaped recovery lie ahead. But the evidence on the ground is so far not confirming their hopes. 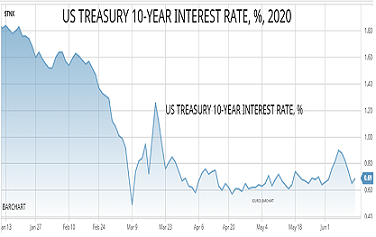 What goes up, comes down, seemed to be the message from US bond markets. The 10-year rate fell back to 0.69% from 0.90%, confirming our caution last week.

The move confirms the dangerous levels of volatility in today’s financial markets.  This in itself is a warning sign, as we have noted before, given that volatility is normally a reliable indicator of a change in direction:

The issue with deflation is that it encourages people to  defer non-urgent purchases, on the basis that prices will be lower in the future. It also means that the real value of debt rises, rather than reducing with inflation. 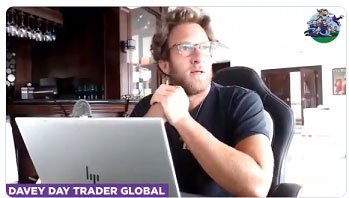 “Bull markets are born on pessimism, grown on skepticism, mature on optimism, and die on euphoria.”

Other experienced investors have also noted that until now, the last wild surge of innocent new investors took place 20 years ago at the end of the dot-com bubble in 1999-2000, when the NASDAQ Index fell 78% and gave up all the gains it had made.

These developments have also led a wave of Instagram-type influencers, such as Dave Portnoy. With 1.5m Twitter followers, his motto is that “stocks only go up”, adding:

“I’m sure Warren Buffett is a great guy but when it comes to stocks he’s washed up. I’m the captain now.”

This group of new traders has been using their $1200 stimulus cheques to gamble on beaten-down but well-known stocks such as Hertz and Chesapeake Energy, as we discussed here on 25 May. But unfortunately for the followers of the new guru, the start of the bankruptcy process usually wipes out the stockholders.

But until then, as those of us who have lived in Texas know, even turkeys can fly in a hurricane.