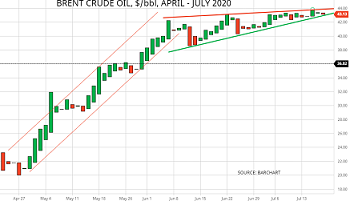 The market closed at $43.34, virtually unchanged for the second successive week.

Prices continue to operate in the very narrow ‘flag shape’ shown in the chart. This is typical of a market preparing for a major move – as we forecast on 1 March based on a similar flag shape, when suggesting correctly that:

“Oil prices (then at $50/bbl) seem highly likely to soon be back at their long-term average, below $30/bbl.”

After the drama of the collapse, the market rallied strongly from April lows. But since June, momentum has slowed, with prices moving in cents per barrel, not dollars. It is also clear that prices face major headwinds.  The flag shape confirms that the bulls and the bears are have probably battled each other to exhaustion:

Another sign of potential downside risk is that the US is close to becoming a net exporter of oil again. Prices have risen high enough for many shale wells to reopen, whilst demand growth is slowing. 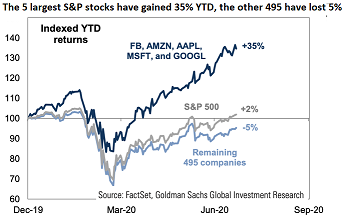 The market shows a similar pattern to Brent, moving in an ever-narrowing range since June to close on Friday at 3215.

The usual definition of a strong market is one where most stocks are moving steadily upwards, based on rising earnings from a strong economy. Today’s market, as the chart shows, is quite different:

And, of course, the economy is weakening, with the Atlanta Fed’s latest Q2 GDP forecast at -35%.

There is also little sign of the promised V-shaped recovery. Congress is already having to debate extending furlough payments.  Major industries are still going through massive restructuring. Job losses are mounting.

In addition, political risk is rising domestically and overseas as the US election approaches and the US administration doubles down on its Cold War rhetoric with China. 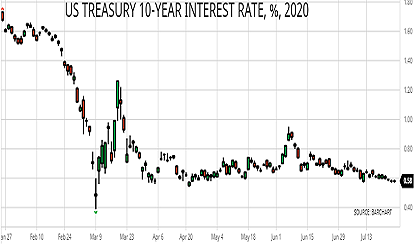 Interest rates are a key indicator, perhaps the key indicator, for the global economy. Bond investors have learnt to their cost about the risks of inflation, and they are not inclined to give governments or central banks “the benefit of the doubt” when it comes to policy promises.

The fact they are now prepared to push rates lower suggests many now share our economic outlook.  A decade of central bank stimulus has not led to the promised supply shortages and inflation.  Instead it has encouraged massive over-capacity, making deflation a more likely outcome. 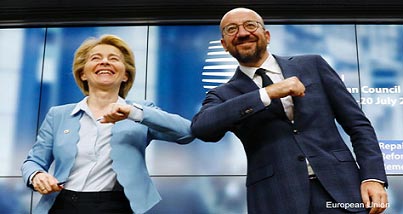 “I am convinced that the old growth-model that is based on fossil-fuels and pollution is out of date, and it is out of touch with our planet. The European Green Deal is our new growth strategy – it is a strategy for growth that gives more back than it takes away. And we want to really make things different. We want to be the frontrunners in climate friendly industries, in clean technologies, in green financing.”

Now, the marathon 4-day Summit meeting of the 27 EU governments has confirmed the direction of travel.  As the Wall Street Journal notes:

“The agreement puts all 27 EU nations on the hook for debt to help prop up the finances of poorer EU nations, a move Germans, led by Ms. Merkel, have balked at for over a decade.  Ms. Merkel’s Damascene conversion, unthinkable a few months ago, raises the prospects of a reversal of fortune for the EU.

One of the key agreements was an €800/t tax on plastic packaging waste from 1 January.  In addition, there will soon be a carbon border tax for products made outside the EU. .

New beginnings are always difficult. But the EU’s moves are far more likely to create a Recovery as we move into the New Normal, than the alternative of continuing to support financial market bubbles with more stimulus money.