It turns out that people didn’t spend lockdown buying smartphones. Q2 volume was actually the lowest since 2014. And Apple’s SE model launch means it is now competing with Android-based Chinese competitors – probably not good news for its future profits. 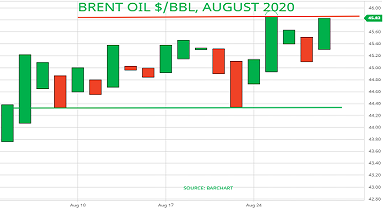 Once again, prices changed by just 50c/bbl at the end of the week, rising to $44.83/bbl. And yet the market had plenty of opportunities to move higher, with the media focused on the potential impact of hurricane Marco and tropical storm Laura on US oil production. Reuters, for example, headlined the news that:

In response, prices rose from Friday’s $44.34/bbl to a peak of $45.86/bbl on Tuesday. But they proved unable to hold this level, even when the US Energy Information Agency reported a further 4.7 mbd fall in crude inventories.

As the chart shows, this relatively minor move was also the biggest move in recent weeks. Brent reached $44.38/bbl on August 4, and since then has plateaued with $45.86/bbl the peak for the month.

This lack of movement adds to the sense that traders are starting to worry that the promised recovery in supply/demand balances looks as far away as ever. 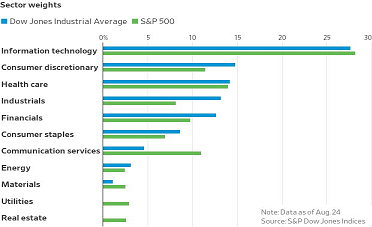 The market rose 100 points last week to close at 3508.  As the chart shows, the tech area is now easily the main driver for both the S&P and Dow Jones indices at around 27.5%  This is more than Energy, Materials, Utilities and Real Estate combined.

Today also sees a paradigm shift take place in the make-up of the 30-strong US Dow Jones Index:

It will be replaced by Salesforce, founded in 1999, as the Dow Jones Index seeks to overcome its under-performance versus the tech-heavy S&P 500.  And it would be no great surprise if the Dow Jones’ panic move turns out to mark the tech sector’s peak.

The US Federal Reserve is “the gift that keeps on giving” for bond traders, as the chart shows. Ever since the financial crisis in 2009, the Fed has been promising to push inflation up to 2%. And every time it prepares to repeat this promise, traders know that another free lunch is being delivered for them.

Last week was no different, with traders pushing rates up to 0.72% again in response to Fed Chairman Jay Powell promising faithfully that:

“We will steadfastly seek to achieve a 2 percent inflation rate over time.”

Quite how they are going to achieve this, is never made quite clear. And so traders have learnt that such moments are a good opportunity to push rates up momentarily, before taking their profits as reality then intervenes to undermine the Fed’s dream. 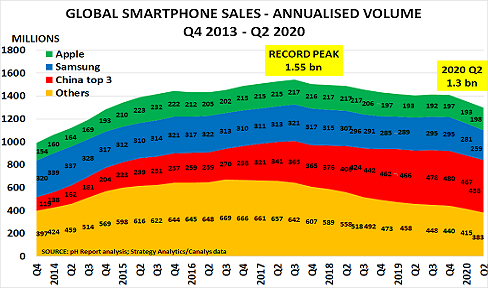 Contrary to all the hype, people didn’t spend lockdowns ordering record volumes of smartphones. In reality, as the chart shows based on Strategy Analytics data, annualised Q2 volume was down 16% versus its Q3 2017 peak at 1.3bn.  And Q2 sales themselves were down 17% at 283m versus 2019, the lowest volume since Q1 2014:

Apple’s problem is that the low-cost segment will be the growth area in coming years as cash-strapped consumers cut back on ‘affordable luxury’. Huawei’s share jumped to a record 19.8%, with volume ahead of Samsung for the first time, despite US sanctions. OPPO also saw a new record at 9.7% and Xiaomi was steady at 10%.

Given this intensifying competition, Apple will find it very hard to retain its outsize profits.