Apple’s shares fell last week after our warning about Chinese competition. And latest chemicals data suggests the world is seeing just a weak rebound rather than a full recovery. 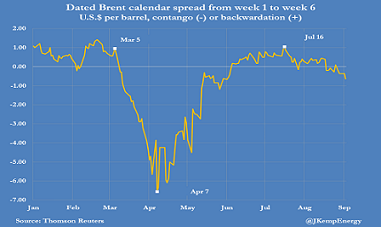 Prices slid 5% last week to $42.66/bbl as traders focused on the imbalances between growing supply and continued weak demand. As the Reuters chart shows, Brent has moved into contango:

The issue is that Inventory is expected to rise in the next few weeks.  China – the world’s largest importer – is seeing a slowdown in demand,  with the important ‘teapot’ sector of private refiners expected to reduce purchases by up to 40%. And a slowdown is also likely in the USA, as gasoline demand reduces after the Labor Day holiday and refineries move into maintenance season ahead of the winter. 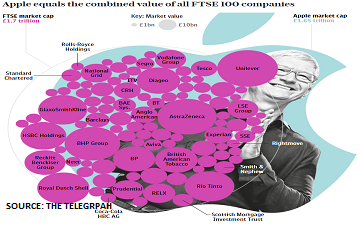 The market slipped 80 points during the week, closing at 3427, as investors finally began to worry about over-valuation in the tech sector.

Experience suggests that “when something is too good to be true, it usually is”.  And that certainly seems to apply to the once-in-a-lifetime valuations for favoured stocks such as Apple and Tesla. Of course, bubble manias can continue for some time, as we saw in 1999-2000. But eventually, reality reasserts itself:

Last month’s rally seems to have been based on record levels of ‘call option’ buying – RobinHood retail investors bought $34bn during August, whilst Japanese investment fund Softbank generated $50bn of option exposure. Given the current 25% weighting of the Famous 5 tech stocks, this was enough to drive the whole Index to the moon.

Buying short-term options in this way is speculation at its most extreme.  And last week’s action in the tech-heavy NASDAQ Index – down 10% from its peak at one stage – suggests the unwinding of this excess may have further to go. 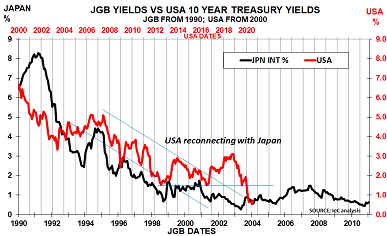 Last week was a rollercoaster week for the 10-year rate. By Thursday it had fallen back to 0.60% as expected. But then it suddenly rallied back to 0.72% again on Chinese media reports that China might consider selling 20% of its $1tn holding of US Treasury bonds.

Geopolitics are always a risk in financial markets. But domestically, the “Japanification” of the Western economy is returning as a key theme.

The chart highlights the parallels between Japanese and US 10-year interest rates. The black line shows Japanese rates since 1990 (LHS, dates at bottom). The red line shows US rates since 2000 (RHS, dates at top). With occasional excursions, they would appear to be following similar paths.

The Fed and most market players have preferred to ignore the ‘inconvenient truth’ created by demographic reality.  But that doesn’t mean it is wrong.

Chemicals data continues to show only a weak rebound 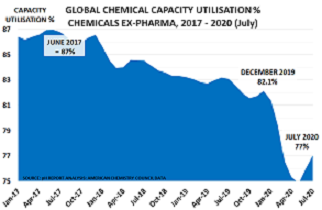 Chemicals is the third largest industry in the world, after agriculture and energy. Chemicals are also used in every country, and in vast numbers of applications. Unsurprisingly, therefore, they are the best leading indicator for the global economy.

Their other great advantage is that Capacity Utilisation (CU%) data is available in almost real time from the American Chemistry Council, as the chart shows: