The Fed’s support meant the S&P 500 made new all-time highs last week. But 20% of US adults with children at home told the US Census they couldn’t afford to buy enough food to feed them properly. 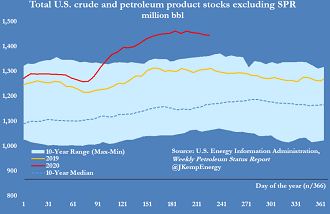 The market closed down 50c/bbl at $44.34, reversing its rise in the previous week.  As the chart from Reuters shows, risks are rising again:

Crude oil stocks are still 4% above the 5-year seasonal average, whilst gasoline stocks are 7% higher and distillate stocks 24% above average. One sign of the problem is that the collapse of air travel has forced refiners to blend normally high-priced jet fuel into diesel, in an effort to keep jet stocks under control.

OPEC+’s problem is that it chose the easy option after the price crash.  It should have sat back and allowed the laws of supply & demand to operate, to keep prices below $30/bbl. This policy would have encouraged growth in global demand and also collapsed US shale output. But instead, today’s higher prices have weakened demand growth and allowed a recovery in shale output.

The higher prices have also encouraged OPEC members to cheat on their quota, with output 2.1mbd higher than agreed in the May-July period.  Iraq was over its quota by 850kbd, Nigeria by 315kbd,  Russia by 280kbd and Kazakhstan by 190kbd.

OPEC’s policy mistake is likely to mean it faces a difficult autumn. 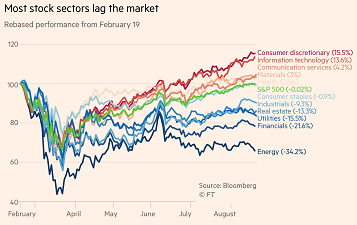 The market rose 25 points last week to 3397, finally making a new all-time closing high. But having reached ‘the top of the mountain’, there were clear signs that traders were beginning to worry about altitude sickness.

The issue is that the US is seeing a K-shaped rebound – a sudden fall, followed by a major divide in fortunes:

And as the Financial Times chart shows, most companies have not shared in the S&P’s success :

Apple, of course, takes the prize for the most ridiculous rise.  Its market capitalisation reached $2tn last week, having more than doubled since its low on 23 March. Yet as we will discuss next week, sales in its critical smartphone segment (>50% of revenue in 2019) have been in decline for the past 3 years. 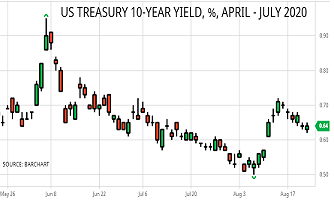 And unsurprisingly, senior traders went back to their deckchairs with big smiles on their faces, after their coup during the US Treasury’s unusual August bond auction.  Last week’s market move means they have already made a handsome profit (bond prices move inversely to yields). But we would expect them to stay on the beach, and let their profits continue to increase.

After all, as we also noted last week, “Nothing has changed in the economy to justify such a large move in bond prices”. 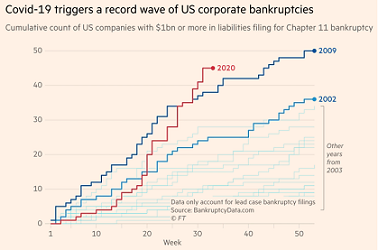 A healthy economy should not be seeing a record wave of corporate bankruptcies, particularly when the Federal Reserve has been printing trillions of dollars to hand out to its friends on Wall Street.  But as the Financial Times notes:

“US equity markets might be breaching record highs, but the state of corporate distress in the country has never been worse.  Large US corporate bankruptcy filings are now running at a record pace and are set to surpass levels reached during the financial crisis in 2009.”

So far this year, 157 companies with liabilities of >$50m have filed for Chapter 11 bankruptcy this year. And, of course, this is only the start of the downturn with key industries including energy, transport, retail, leisure and commercial property still moving deeper into crisis.  As former US Labor Secretary Robert Reich has warned:

““Ending the $600 per week federal unemployment benefits will push tens of millions of Americans into, or uncomfortably close to, poverty. They won’t have the money to buy billions of dollars worth of goods and services. As a result, the entire economy will suffer. Small businesses will continue to suffer the most because they’re already precarious”.