Financial markets have added $10tn to the S&P 500’s value in recent weeks. But as the reporting season opens, companies will start telling us how things really are in their markets. It may prove a powerful wake-up call.

Producers are clearly becoming nervous about the outlook. Total’s CEO has told investors “refining margins are absolutely catastrophic“, whilst Saudi Arabia is threatening to start another price war as the Wall Street Journal reports:

“During a June 18 OPEC video conference, Prince Abdulaziz signaled that the kingdom would sell its oil at a discount to undercut Angola and Nigeria, after the two delegations said they weren’t ready to commit to specific figures on curbs, according to the delegates. “We know who your customers are,” the prince said, according to a person familiar with the call.”

And they have reason to be worried, with US demand weakening again as Covid infections rise, and individual states impose travel restrictions. Even more worrying is that Caixin reports China’s oil storage is now full:

“China is almost out of space to hold the oil that domestic traders bought at bargain-basement prices earlier this year when the Covid-19 pandemic crushed global crude demand”..

Oil tankers at Shandong, a leading oil refining hub, are having to wait 15-20 days before they can offload.

The major oil companies have been busy reducing their short and longer-term price forecasts, as the chart shows. And hedge funds are no doubt watching developments, with interest. Will Q3 bring them another big payday on the downside? 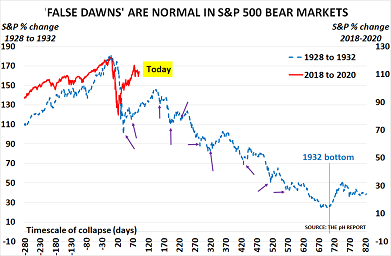 The market managed a July 4 ‘bounce” last week, reversing recent losses to reach 3130. But after the rally, comes the results. And as Bloomberg warn:

“So few firms issued profit guidance in June — just 17 — that Bank of America strategists wrote in a report this week that the data was “too sparse to analyze.” Over the last three months, 400 companies in the S&P 500 failed to provide guidance, BofA data show, a record going back to at least 2001.”

Normally, this background would lead to caution. But in recent weeks, investors have been swamped with cash. Central banks have handed out $tns to asset managers. Governments have sent cheques to furloughed workers. And sitting at home gets boring after a while, as we all know.

Unsurprisingly, Tesla has been a star of the rally, becoming the world’s most valuable automaker with a market value of $225bn versus Toyota’s $200bn:

But now actual Q2 results will start to be published, plus outlooks for the second half of the year.

And as the chart shows comparing today’s rally with 1929, the market has gone further and faster this time. But it could easily do the same thing on the way down if reality disappoints. 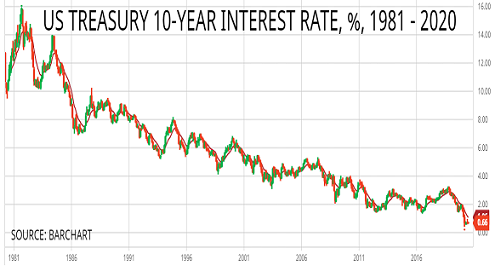 The rate rallied a little to 0.66% as part of the July 4 rally. But as the chart shows, the history of US interest rates for the past 40 years has been downwards – with regular rallies encouraging the central banks to believe they might be able to create inflation.

Of course, if companies start to report “blow-out earnings” in the next few weeks, and the worrying rise in new US Covid cases reverses, then rates could rally quite sharply. But for the moment, at least, caution seems the best approach. 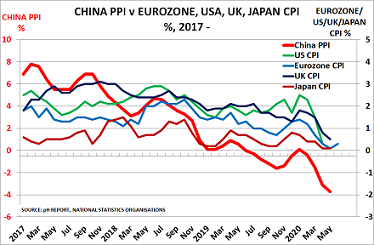 The downward move in global inflation rates continued last month, as the chart shows. Since the beginning of the year:

The speed and scale of the downturn confirms the underlying weakness in supply/demand balances. Of course, if demand really does turn around, then inflation could well rise. But for the moment, deflation seems the more likely outcome.