Wall Street missed the fact that Friday’s US jobs report misclassified up to 4.9 million workers as working, when they were actually jobless. But that’s what happens when you ignore the small print. 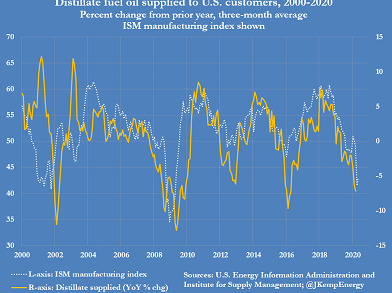 The market closed Friday up a further $5/bbl at $42.24bbl, as traders waited for Saturday’s planned OPEC+ meeting to decide on further output cuts.

They saw no need to focus on the fact that US oil producers are starting to ramp up output again, given today’s high prices, or on the boring details of supply and demand as shown in Reuters’ chart of US distillate demand:

“Lockdowns are easing in most of the major economies, permitting factories to resume operations; now the problem is the lack of household and business demand, which will weigh on diesel use through the rest of 2020…Manufacturing surveys show output continuing to slide, even as lockdowns relax, as businesses struggle with the build up of unsold inventories along the supply chain and low sales to end users.

OPEC’s meeting itself wasn’t exactly positive either, when the result came through – with Russia agreeing to just a month’s extension of the current cuts and Mexico refusing to extend at all. 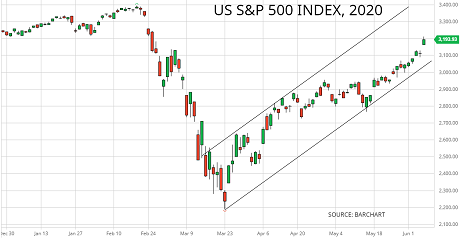 The market closed Friday at 3193, up a further 150 points over the week, despite the increasingly negative news about the economy. The mainstream media is, however, starting to share our concerns over this disconnect, and the gap between performance by the broad mass of the stocks and a few Winners, as the Wall Street Journal reports:

The question for investors is therefore two-fold – do they believe that:

We have, however, seen this type of market before, in 1973 and 1999. And neither period ended well for investors. Of course, this time may be different – but history suggests it usually isn’t. 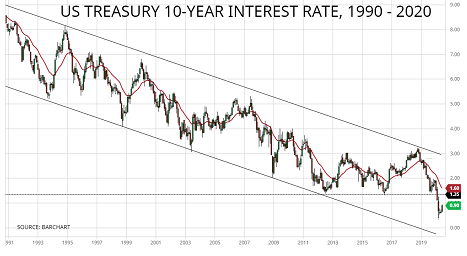 Interest rates soared during the week, with the 10-year rate jumping to 0.90% from last week’s 0.64%. As the chart shows, the key question for investors is whether the rate will take another giant leap and regain its recent peak at 1.35%? Or will it stabilise somewhere below that level, and then head lower again?

The key indicator industries are likely to be those most beaten down – travel, leisure and associated businesses such as commercial property and construction.

Of course, they are unlikely to stay at today’s depressed levels forever. And percentage gains can look wonderful when starting from a low base – an auto dealer who sells 2 cars instead of 1 has just doubled her sales after all.

But bankruptcies are still taking place in these industries at an alarming rate, and caution seems the operative word. 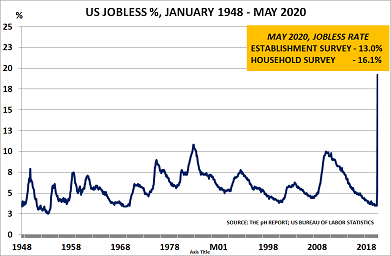 The US jobs reports can usually be guaranteed to create some interest, but Friday’s report was one for the history books.

President Trump rushed to the Rose Garden in the White House to claim it showed “We’ve made every decision correctly”. He also argued that George Floyd, who died in police custody in Minneapolis, would be “looking down right now and saying this is a great thing“, even though black unemployment actually rose from 16.7% to 16.8%.

This wasn’t the only cautionary note in the report, for those who bothered to read the small print. Every month, the Bureau of Labour Studies and Census Dept use two surveys to check the jobless position:

There will always be differences between the two surveys, but clearly these is a major problem at the moment, as the BLS warn:

“As happened in April and March, some people who were not at work during the entire reference week for reasons related to the coronavirus were not included in this category. Instead, they were misclassified as employed but not at work.”

They estimate 1.4m people were misclassified in March, as well as 7.5 million in April and 4.9 million in May. And as the chart confirms, the other key issue is that the absolute number of people out of work is at levels never seen before in the post-War period..