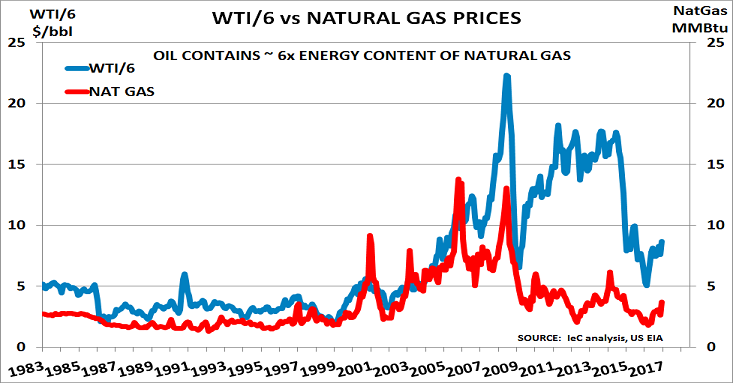 Oil prices, and those of natural gas, have been on a wild ride over the past year, as the chart confirms.  It shows US WTI prices divided by 6, as this enables a comparison with natural gas prices in terms of energy content:

In natgas, the EIA’s commentary confirmed the market’s underlying weakness:

“US Natgas prices in 2016 were the lowest in nearly 20 years (and) In November 2016, the United States became a net exporter of natural gas on a monthly basis for the first time since 1957″.

  “Global oil supplies in November edged up to a record high 98.2 mb/d, as a drop in non-OPEC output was more than offset by higher OPEC production. OPEC output stood 1.4 mb/d higher than a year ago
  OECD inventories have drawn 75 mb since reaching a historical high in July, but remain 300 mb above the five-year average
  Refinery crude intake in 1Q17 is forecast to grow by only a modest 310 kb/d y-o-y, after growing by only 350 kb/d growth in 4Q16″

Nothing has really changed in terms of underlying supply/demand balances during the year.  In turn, this raises the question as to why prices have risen so strongly, particularly in recent weeks? 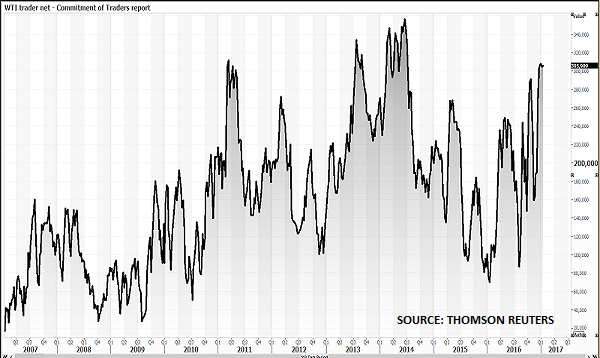 The answer is simple, and captured in the second chart showing net speculative positions in the WTI futures market.  As Reuters reported last month:

“Hedge funds have amassed a record bullish position in crude oil in anticipation OPEC and non-OPEC oil producers will succeed in rebalancing the market and reducing excess stocks next year.  Fund managers accumulated a net long position equivalent to 796 million barrels in the three main futures and options contracts linked to Brent and West Texas Intermediate by Dec. 13.  The net position almost doubled from a low of 422 million barrels four weeks earlier.”

Those doing the buying have adopted a high-risk strategy. Of course, the year-end is a great time to move markets, when many players are out of the office.  But they are betting against some well-known and well-established facts:

  The market is well supplied, and major players such as Shell suggest the world may be close to “peak demand”
  OPEC’s record in implementing output cuts is poor, and Russia has never cut production as promised

Saudi Arabia and its GCC partners are the only ones likely to cut production.  As I discussed last month, it cannot rely on President Trump to support the critical ‘Oil-for-Defence’ deal agreed in 1945 between King Saud and President Roosevelt.  It dare not, therefore, break with its Arab neighbours and keep pumping.

But other OPEC members are unlikely to provide major support.

  Iran is highly likely to keep pumping.  President Rouhani faces re-election in May, and his position has just become more difficult with the death of former President Rafsanjani.
  Libya’s output has already trebled over the past 6 months to 750kbbls/day, and could potentially return to previous levels of 1.6 million bbls/day if the civil war comes to an end.
  Nigeria is also capable of increasing output, with its Oil Minister recently claiming it had reached 1.9 mb/d
  Others such as Iraq and Venezuela are equally doubtful

The issue is simple. Cash in the bank is the priority for all the major oil producers.

US producers are in best shape, as they have been able to hedge their production at today’s high prices. But cash is the priority for other producers too. The UAE is the only OPEC member in the Middle East/N Africa able to balance its budget at $50/bbl, as the IMF has noted.  OPEC also faces another fundamental problem:

  Cartels can only operate on the basis of trust – each member has to believe others will take the pain of cutbacks
 The OPEC cartel has never seen this level of trust
 The only time cuts took place effectively was in 1981-1985, when Saudi cut production from 10.3mb/d to 3.6mb/d

Unless Saudi does this again, which appears unlikely due to its own budget needs, history would suggest the output cuts will fail to achieve their target. And, of course, as prices fall, so countries will have an incentive to sell more in order to boost revenues, creating a vicious circle. Hedge funds will also quickly reverse their speculative positions.
.
What this may mean for political stability in the Middle East and N Africa is a question for another day. In the meantime, it is clear that OPEC’s output agreement is a highly risky gamble. If it fails, prices could easily fall a long way very quickly, given today’s surpluses.