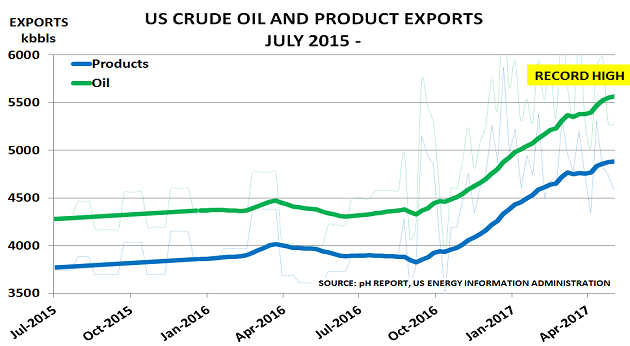 Naimi’s strategy had stopped the necessary investment being made to properly exploit the new US shale discoveries. But this changed as the OPEC/non-OPEC countries began to talk prices up to $50/bbl. As CNN reported last week:

“Cash is pouring into the Permian, lured by a unique geology that allows frackers to hit multiple layers of oil as they drill into the ground, making it lucrative to drill in the Permian even in today’s low prices.”

US oil/product inventories have already risen by 54 million barrels since January last year and are, like OECD inventories, at record levels. And yet now, OPEC and Russia have decided to double down on their failing strategy by extending their output quotas to March 2018, in order to try and maintain a $50/bbl floor price. US shale producers couldn’t have hoped for better news.   As the chart shows:

None of this would have happened if Naimi’s policy had continued.  Producers could not have raised the necessary capital with prices below $30/bbl.  But now they have spent the capital, cash-flow has become their key metric. 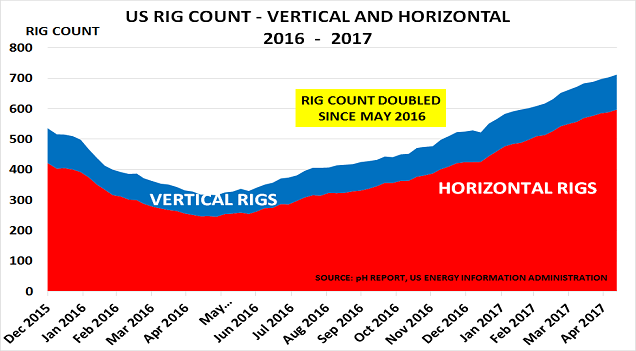 The second chart confirms the turnaround that has taken place across the US shale landscape, as the oil rig count has doubled over the past year. Drilling takes between 6 – 9 months to show results in terms of oil production, and so the real surge is only just now beginning.  Equally important, as the Financial Times reports, is that today’s horizontal wells are far more productive:

“This month 662 barrels/d will be produced from new wells in the Permian for every rig that is running there, according to the US government’s Energy Information Administration. That is triple the rate of 217 b/d per rig at the end of 2014.”

Before too long, the oil market will suddenly notice what is happening to US shale production, and prices will start to react.  Will they stop at $30/bbl again? Maybe not, given today’s record levels of global inventory.

As the International Energy Agency (IEA) noted last month, OECD stocks actually rose 24.1mb in Q1, despite the OPEC/non-OPEC deal. And, of course, as the IEA has also noted, the medium term outlook for oil demand has also been weakening as China and India focus on boosting the use of Electric Vehicles.

The current OPEC/non-OPEC strategy highlights the fact that whilst the West has begun the process of adapting to lower oil prices, many oil exporting countries have not.  As Nick Butler warns in the Financial Times:

“Matching lower revenues to the needs of growing populations who have become dependent on oil wealth will not be easy. It is hard to think of an oil-producing country that does not already have deep social and economic problems. Many are deeply in debt.

“In Nigeria, Venezuela, Russia and even Saudi Arabia itself the latest fall, and the removal of the illusion that prices are about to rise again, could be dangerously disruptive. The effects will be felt well beyond the oil market.”