Oil prices are finally starting to reconnect with other fossil fuel prices, as the chart shows.  It compares US WTI prices in terms of $/MMBtu value (WTI/5.8), versus US natural gas and coal prices:

Of course, WTI has recovered since then. But it is hard to see the OPEC+ group managing to hold together for much longer. Mexico has already said it won’t go along with the July’s proposed cuts, and history would suggest that other countries such as Iraq and Nigeria may well find reasons to avoid making the “catch up” cuts promised after failing to meet their quotas in Q2.

Russia has always been uneasy about pushing for higher prices, as it does not want to lose market share to the USA. It needs just $40/bbl to balance its budget according to the IMF, whilst Saudi Arabia needs ~$80/bbl. And US shale producers have been busy restarting closed wells since early June, as they could happily hedge their output at $40/bbl.

2 key questions are key to the outlook as it is clear that current prices are a ceiling given today’s supply/demand balances:

Will demand see a V-shaped recovery in H2? 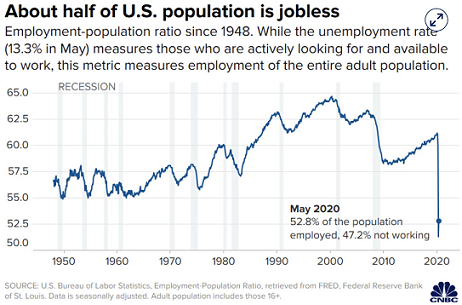 Financial markets have been busy pricing this scenario into their outlook since governments and central banks began their massive stimulus programmes.  But in reality, this seems quite unlikely as the $600/week furlough payments finish at the end of next month:

Will oil start to see major competition from renewables? 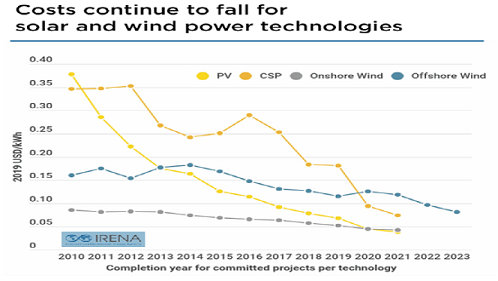 OPEC+ assume oil will always be the main source of energy. But history suggests the Oil Age is coming to an end, as I noted here on March 1 when forecasting the price collapse.  Last week, BP agreed that oil demand may have peaked in 2019 and took a $17.5bn writedown on oil/gas assets:

The market’s blindness to these developments in no great surprise, as incumbents are always the last to recognise when major paradigm shifts are underway.  This is why scenario planning is critically important in today’s market:

So some people are going to be badly wrong, whatever happens – meaning that Winners and Losers are highly likely to emerge.