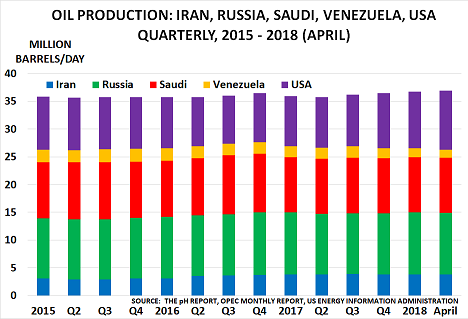 Today, we have “lies, fake news and statistics” rather than the old phrase “lies, damned lies and statistics”. But the general principle is still the same.  Cynical players simply focus on the numbers that promote their argument, and ignore or challenge everything else.

The easiest way for them to manipulate the statistics is to ignore the wider context and focus on a single “shock, horror” story.  So the chart above instead combines 5 “shock, horror”  stories, showing quarterly oil production since 2015: 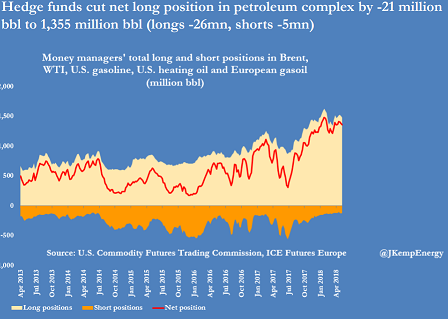 So why, you might ask, has the oil price rocketed from $27/bbl in January 2016 to $45/bbl in June last year and $78/bbl last Friday?  Its a good question, as there have been no physical shortages reported anywhere in the world to cause prices to nearly treble.  The answer lies in the second chart from John Kemp at Reuters:

Speculative buying, by definition, isn’t connected with the physical market, as OPEC’s Secretary General noted after meeting the major funds recently:  “Several of them had little or no experience or even a basic understanding of how the physical market works.”

This critical point is confirmed by Citi analyst Ed Morse:  “There are large investors in energy, and they don’t care about talking to people who deal with fundamentals. They have no interest in it.”

Their concern instead is with movements in currencies or interest rates – or with the shape of the oil futures curve itself. As the head of the $8bn Aspect fund has confirmed:

“The majority of our inputs, the vast majority, are price-driven. And the overwhelming factor we capitalise on is the tendency of crowd behaviour to drive medium-term trends in the market.” (my emphasis).

OIL PRICES ARE NOW AT LEVELS THAT USUALLY LEAD TO RECESSION 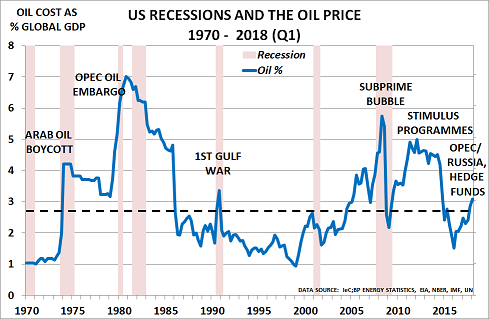 The hedge funds have been the real winners from all the “shock, horror” stories.  These created the essential changes in “crowd behaviour”, from which they could profit.  But now they are leaving the party – and the rest of will suffer the hangover, as the 3rd chart warns:

The reason is simple.  People only have so much cash to spend.  If they have to spend it on gasoline and heating their home, they can’t spend it on all the other things that drive the wider economy.  Chemical markets are already confirming that demand destruction is taking place.:

Even worse news may be around the corner.  Last week saw President Trump decide to withdraw from the Iran deal.  His daughter also opened the new US embassy to Jerusalem.  Those with long memories are already wondering whether we could now see a return to the geopolitical crisis in summer 2008.

As I noted in July 2008, the skies over Greece were then “filled with planes” as Israel practised for an attack on Iran’s nuclear facilities.  Had the attack gone ahead, Iran would almost certainly have closed the Strait of Hormuz.  It is just 21 miles wide (34km)  at its narrowest point, and carries 35% of all seaborne oil exports, 17mb/d.

As Mark Twain wisely noted, “history doesn’t repeat itself, but it often rhymes”.  Prudent companies and investors need now to look beyond the “market-moving, shock, horror” headlines in today’s oil markets.  We must all learn to form our own judgments about the real risks that might lie ahead.

Given the geopolitical factors raised by President Trump’s decision on Iran, I am pausing the current oil forecast.