The past few weeks have been a nightmare for the many hedge funds who gambled on higher oil prices. They obviously hadn’t realised that OPEC’s November quota agreement was most unlikely to lead to a major rebalancing of today’s vastly over-supplied market.  But as I suggested in December:

“The simple fact is that the arrival of US shale production means OPEC are no longer the swing producer, able to control the world market. The quotas will have little effect in themselves, as most of the participants will cheat.  Instead, they will simply help to boost US oil and gas production, whilst turbo-charging the use of smart meters.”

Now the funds are finally starting to bail out of their positions.  As John Kemp of Reuters reported this week under the headline Hedge funds rush for exit after oil trade becomes crowded:

“Hedge funds cut their bullish bets on oil by the largest amount on record in the week to March 14, according to the latest data published by regulators and exchanges. Hedge funds and other money managers cut their combined net long position in the three main futures and options contracts linked to Brent and WTI by a record 153 million barrels in just seven days.  The reduction in the net long position coincided with the sharp fall in oil prices, which started on March 8 and continued through March 14.

“Before the recent sell off, hedge fund managers had boosted their net long position in Brent and WTI by 530 million barrels between the middle of November and the middle of February.  Funds amassed a record 1.05 billion barrels of long positions, while short positions were cut to just 102 million barrels, the smallest number since oil prices started slumping in 2014. But large concentrations of hedge fund positions, and an imbalance between the long and short sides of the market, often precede a sharp reversal in oil prices.”

Another sign of the hedge funds’ problem is that even after this sell-off, ThomsonReuters data shows their net position on WTI is still higher than in early August 2014 – just before the price collapse from $105/bbl began.  Or as Bloomberg noted:

“The value of long positions for Brent and West Texas Intermediate crude, the global and U.S. benchmarks, reached a combined $56 billion on Feb. 23“.

$56bn is an awful lot of oil to have to try and sell in a falling market.  And of course, the hedge funds are well behind savvy traders such as Vitol and TOTAL, who have been selling their barrels of stored oil for some time.

Already, WTI prices are back at the $48/bbl level seen at the end of November, before the rally began.  Equally important is that the contango in the futures market has collapsed – with prices for May 2018 now just $0.30/bbl higher than for May this year.  $0.30c/bbl won’t pay insurance and storage costs for a year, so all that stored oil will now have to be sold, as quickly as possible.

US SHALE OIL OUTPUT IS RAMPING UP VERY QUICKLY
The funds, and many observers, have simply failed to recognise that the structure of the US shale oil market has completely changed in the past 2 years.  As I discussed 18 months ago under the heading, Oil price forecasts based on myths, not proper analysis, each well no longer has to be redrilled every few months, .

Today, the Permian Basin in Texas/New Mexico has become the showpiece field for modern shale production.  Latest EIA data shows its production next month is forecast to be 2.3mbd, nearly half of total shale production of 5mbd.  It also has almost of a third of the 5443 ‘Drilled but Uncompleted” wells, now waiting to produce oil and gas in the major shale fields.  And as the chart above shows:

   Its oil production per rig has more than doubled over the past 2 years due to horizontal drilling
   Each rig now produces 662 bbls/day compared to 288 bbls/day in March 2015
   Since May last year, the number of rigs in operation has more than doubled – from only 137 to 300 last month
   As each rig normally takes 6 – 9 months to finish its work, the major expansion of production is still to come 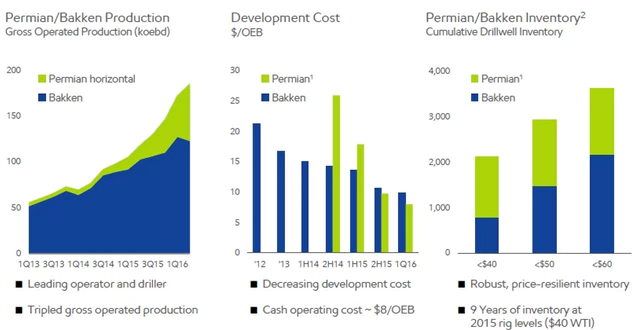 Unsurprisingly, major oil producers are heavily invested in the field, with ExxonMobil having just spent $5.6bn to buy 3.4bn bbls of oil equivalent reserves. As the Forbes chart shows, EM’s cash operating cost was already less than $10/bbl last year.   And EM now plans to more than double its rigs in the Basin to 25 after the investment closes.

Of course geopolitical events, such as a US bombing of N Korea, could change these dynamics overnight.

But anyone still gambling on higher oil prices and a rapid rebalancing of the market, probably has a very nasty shock ahead of them.  The simple fact is that not only are US inventories at near-record levels but, as the top chart shows, the US is now also exporting 5mbd of crude and oil products – and this volume is rising month by month.

It would be no surprise at all, if prices fell back to their median level since 1861 of $23/bbl in the next few months. And they might have to go even lower, temporarily, as many producers happily hedged themselves at $50/bbl for the rest of this year, when the speculative bubble was at its height.