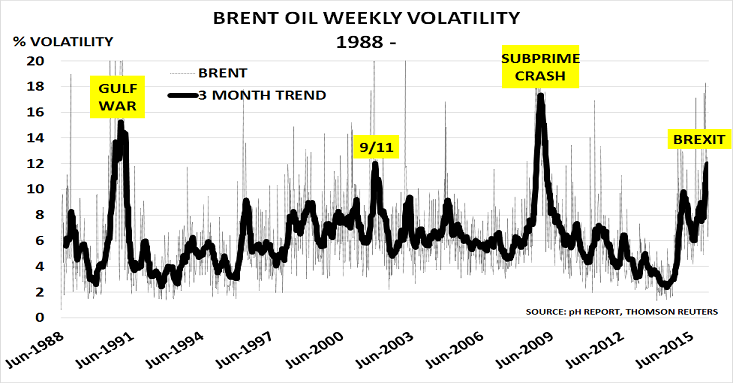 The 3 month trend of Brent oil price volatility has reached its highest level since the 2008 financial crisis and before that, the 1st Gulf War in 1990/91.  As the chart shows, it is even higher than after 9/11.

Yet there have been no developments in oil markets themselves to justify such a level. There has been no invasion of a major oil-producing state, or major disruption of supplies.  On the contrary, this month’s International Energy Agency’s report comments:

“Commercial inventories in the OECD increased from March levels by 14.4 mb to stand at 3 065 mb by end-April, an impressive 222 mb above one year earlier. As the US driving season kicks off, OECD gasoline stocks stand above average levels and last year in absolute and days of forward demand terms. There is a similar picture in China”.

The volatility has instead occurred as a result of renewed conflict between the fundamentals of supply and demand, and developments in financial markets.

Money managers have piled into the oil futures markets since January, gambling on the arrival of further stimulus from the Bank of Japan and the European Central Bank. They also assumed correctly that the US Federal Reserve and Bank of England would back off the idea of interest rate rises.

We have therefore seen a repeat of last year’s January – May rally which saw prices rise by 50%, from $45/bbl to $70/bbl. The current rally has produced a more extreme result (from a lower base price), with Brent prices doubling from $27/bbl to $53/bbl. It has had equally flimsy foundations in terms of the fundamentals of supply and demand:

Yet in reality, any production freeze would merely maintain current over-supply.  As the IEA add:

“In any event, following three consecutive years of stock build at an average rate close to 1 mb/d there is an enormous inventory overhang to clear. This is likely to dampen prospects of a significant increase in oil prices.”

And, of course, the rally itself has proved counter-productive in terms of oil market rebalancing, as it has enabled US and other producers to hedge forward their production at acceptable margins through H2.

The real cause of the rally, and of the increased volatility, has been the US Federal Reserve’s backtracking on its promised 4 interest rate rises during 2016. Once these became doubtful, financial players began to sell the US$ and buy commodities as a supposed “store of value” – a repeat of what happened between 2009 – 2014.  Now, of course, the reverse is happening as Brexit worries prompt traders to rush back into the US$ as a “safe haven”.

This volatility is good news for traders, but very bad news for anyone who actually uses oil and its derivatives:

“China’s strong gain in crude oil imports isn’t a reflection of higher demand, in fact it’s likely that actual growth in consumption of oil products in China is non-existent.”

In turn, of course, China’s export drive is reducing margins for other Asian refiners.  They were already struggling to find alternate markets for their exports as China becomes more self-sufficient.  Now they are also having to compete with China’s own exports in 3rd party markets.

The key issue is that the current oil price rally has once again overturned the fundamentals of supply and demand.  By thus adding to existing energy surpluses, it has increased the risk of long-term price deflation emerging.  Supply has risen far more than demand all along the energy market value chains.

It also adds to worries that the fundamental assumptions behind the $3tn of energy market debt – $100/bbl oil and double-digit growth in China – are looking increasingly implausible.  When financial markets wake up to this unpleasant fact, even more volatility could result.

It could be a very difficult H2 indeed.