Oil markets can’t quite make up their mind as to what they want to do, as the chart confirms. The are trapped in a major ‘flag shape’.

Every time they want to move sharply lower, the bulls jump in to buy on hopes of a major US-China trade deal and a strong economy. But when they want to make new highs, the bears start selling again.

Recent weeks have seen the bulls jump back in, when prices again threatened to break the flag’s floor below $60/bbl. And, of course, OPEC keeps making noises about further output cuts in an effort to talk prices higher.

But as the charts from the International Energy Agency’s latest monthly report confirm:

“The OPEC+ countries face a major challenge in 2020 as demand for their crude is expected to fall sharply.”

This is OPEC’s problem when it aims for higher prices than the market will bear. Other producers, inside and outside OPEC, always take advantage of the opportunity to sell more volume. And once they have spent the capital on drilling new wells, the only factor holding them back is the actual production cost.

Capital-intensive industries like oil have always had this problem. They raise capital from investors when prices are high – but high prices naturally choke off demand growth, and so the new wells come on stream just when the market is falling. Next year the IEA suggests will see 2.3mbd of new volume come on stream from the US, Canada, Brazil, Norway and Guyana as a result.

“Sluggish refinery activity in the first three quarters has caused crude oil demand to fall in 2019 for the first time since 2009.” 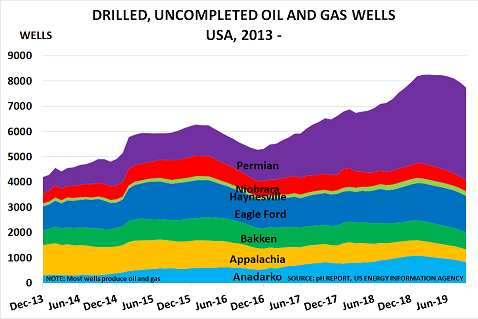 OPEC has had a bit of a free pass until recently, though, in respect of the new volumes from the USA. As the chart shows, the shale drilling programme led to a major volume of “drilled but uncompleted wells”. In other words, producers drilled lots of wells, but the pipelines weren’t in place to then take the new oil to potential markets.

But now the situation is changing, particularly in the prolific Permian basin region, as Argus report:

“The Permian basin has been a juggernaut for US producers, with output quadrupling from under 1mbd in 2010 to more than 4.5mbd in October.  US midstream developers have responded with a wave of new long-haul pipelines to shuttle the torrent of supply to Houston, Corpus Christi and beyond.

As a result, some of that oil trapped in drilled but uncompleted wells is starting to come to market. So if OPEC wants to keep prices high, it will either have to cut output further, or hope that the world economy starts to pick up. 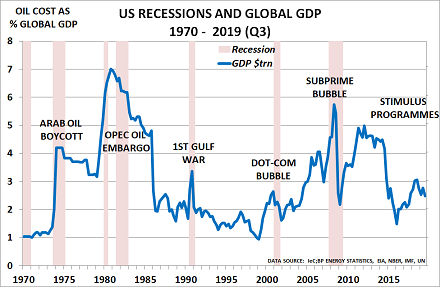 But the news on the economic front is not good, as everyone outside the financial world knows.  Central banks are still busy pumping out $bns to keep stock markets moving higher. But in the real world outside Wall Street, high oil prices, trade wars, Brexit uncertainty and many other factors are making recession almost a certainty.

As the chart shows, there is a high correlation between the level of oil prices and global GDP growth. Once oil takes ~3% of GDP, consumers start to cut back on other purchases. They have to drive to work and keep their homes warm in winter. And with inflation weak, their incomes aren’t rising to pay the extra costs.

The US sums up the general weakness.  The impact of President Trump’s tax cuts has long disappeared. And now concerns are refocusing on the debt that it has left behind. As the function of debt is to bring forward demand from the future, growth must now reduce.  US GDP growth was just 1.9% in Q3, and the latest Q4 forecast from the Atlanta Fed is just 0.3% .

Its still too early to forecast which way prices will go, when they finally break out of the flag shape. But their failure to break upwards in the summer, when the bulls were confidently forecasting war with Iran, suggests the balance of risks is now tilting to the downside.