Everything that could go wrong, is now going wrong for oil producers.  As the International Energy Agency reports:

“Global oil demand has been hit hard by coronavirus and the widespread shutdown of China’s economy. Demand is now expected to fall by 435 kb/d in Q1, the first quarterly contraction in more than 10 years.”

China and India have been the main source of demand growth over the past decade, and their economies are now clearly struggling.  China’s battle with coronavirus has had a terrible impact on oil demand, as Reuters reports:

“When your house is on fire, you can either treat it with a garden hose and risk losing the building, or call the fire brigade.”

Remarkably, many on Wall Street still seem to believe in a V-shaped recovery from the coronavirus epidemic. But in reality, the demand picture may well get worse before it gets better, as other major oil consumers including S Korea, Japan and Italy are now suffering from the virus.

Equally important, as the chart shows, oil prices have finally broken out of the ‘flag shape’ that has been building for years, as I last discussed in November: 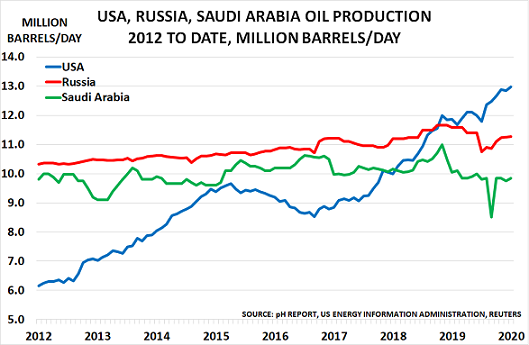 The supply position is also not following the story laid out by the hedge funds. They had bought 533mb of oil in Q4, assuming that OPEC+ Russia would happily reduce output to support prices.

But in reality, as the chart shows, Russian output hit a record post-Soviet era high in 2019.  And at December’s OPEC+ meeting, it was allowed to increase condensate output outside the quota – making thoughts of a cutback even more notional. The issue, as Reuters notes is:

“Saudi Arabia needs oil prices of about $80/bbl to balance its state budget while Russia can cope with prices as low as $42/bbl.”

The funds have also been disappointed by the failure of US shale output to collapse:

So as always, Saudi Arabia has been left to carry the main burden of the cuts.

Saudi has had indirect support from the reduction in Iranian and Venezuelan output as a result of sanctions, along with the current reduction in Libyan output. But clearly the risks are rising for a collapse of the cartel, as happened in 1985 and temporarily in 2015.

Brent prices above $60/bbl were based on the idea of a perfect world – where OPEC+ cuts and a synchronised global upturn would fuel demand; the US-China trade war would end; and sustainability concerns would disappear. None of this looks likely today

And as Sheikh Yamani presciently warned, the Oil Age will not end because we run out of oil.  Unless OPEC+ prove able to make really deep cuts in output at this week’s meeting, oil prices seem highly likely to soon be back at their long-term average, below $30/bbl.

At this point, OPEC countries may regret that they didn’t diversify their economies whilst the oil money was still rolling in.