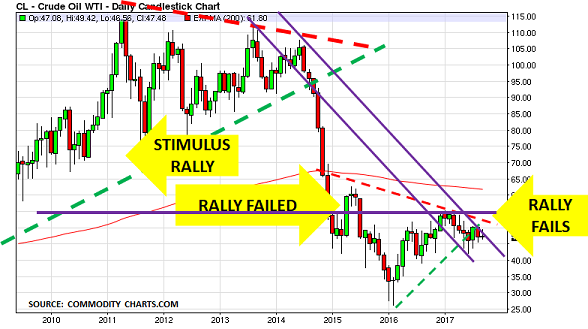 Its been a long time since oil market supply/demand was based on physical barrels rather than financial flows:

  First there was the subprime period, when the Fed artificially boosted demand and caused Brent to hit $147/bbl
  Then there was QE, where central banks gave free cash to commodity hedge funds and led Brent to hit $127/bbl
  In 2015, as the chart highlights for WTI, the funds tried again to push prices higher, but could only hit $63/bbl
  Then, this year, the funds lined up to support the OPEC/Russia quota deal which took prices to $55/bbl

As the Wall Street Journal reported:

“Dozens of hedge-fund managers and oil traders attended a series of closed-door meetings in recent months with OPEC leaders—the first of their kind, according to Ed Morse, Citigroup Inc.’s global head of commodities research, who helped organize some of the events.”

These developments destroyed the market’s key role of price discovery:

  Price discovery is the process by which buyer and seller agree a price at which one will sell and the other will buy
  But subprime/QE encouraged this basic truth to be forgotten, as commodities became a new asset class
  Investment banks saw the opportunity to sell new and highly profitable services to sleepy pension funds
  They ignored the obvious truth that oil, or copper or any other commodity are worthless on their own

There was never any logic for commodities to become a separate new asset class.  A share in a company has some value even if the management are useless and their products don’t work properly.  Similarly bonds pay interest at regular intervals.  But oil does nothing except sit in a tank, unless someone turns it into a product.

The impact of all this paper trading was enormous.  Last year, for example, it averaged a record 1.1 million contracts/ day just in WTI futures on the CME.  Total paper trading in WTI/Brent was more than 10x actual physical production. Inevitably, this massive buying power kept prices high, even though the last time that supplies were really at risk was in 2008, when there was a threat of war with Iran.

Finally, however, the commodity funds are now leaving.  Even Andy Hall, the trader known as “God” for his ability to control the futures market, is winding up his flagship hedge fund as he:

“Complained that it was nearly impossible to trade oil based on fundamental trends in supply and demand, which are now too uncertain.”

Hall seemed unaware that his statement exactly described the role of price discovery.  Markets are not there to provide guaranteed profits for commodity funds. Their role via price discovery is to help buyers and sellers balance physical supply and demand, and make the right decisions on capital spend.  By artificially pushing prices higher, the funds have effectively led to $bns of unnecessary new capital investment taking place.

NOW MARKETS WILL HAVE TO PICK UP THE PIECES 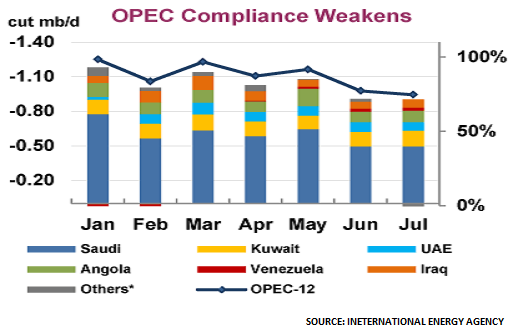 The problem today is that markets – which means suppliers and consumers – will now have to pick up the pieces as the funds depart.  And it seems likely to be a difficult period, given the length of time in which financial players have ruled, and the distortions they have created.

Major changes are already underway in the physical market, with worries over air quality and climate change leading France, the UK, India and now China to announce plans to ban sales of fossil-fuelled cars.  Transport is the biggest single source of demand for oil, and so it is clear we are now close to reaching “peak gasoline/diesel demand“.

OPEC obviously stands to be a major loser.  Over the past year, the young and inexperienced Saudi Crown Prince Mohammed bin Salman chose to link up with the funds. His aim was keep prices artificially high via an output quota deal between OPEC and Russia.  But history confirms that such pacts have never worked.  This time is no different as the second chart from the International Energy Agency shows, with OPEC compliance already down to 75%.

Consumers will also pay, as they have to pick up the bill for the investments made when people imagined oil prices would always be $100/bbl.  And consumers, along with OPEC populations, will also end up suffering if the shock of lower oil prices creates further geopolitical turmoil in the Middle East.

As always, “events” will also play their part.  As anyone involved with oil markets knows, there seems to be an unwritten rule that says:

The rule certainly seems to be working today, as the catastrophe of Hurricanes Harvey, Irma and Jose creates devastation across the Caribbean and the southern USA.

Not only is this reducing short-term demand for oil, but it will also turbo-charge the move towards renewables.  Mllions of Americans are now going to want to see fossil fuel use reduced, as worries about the impact of climate change grow.