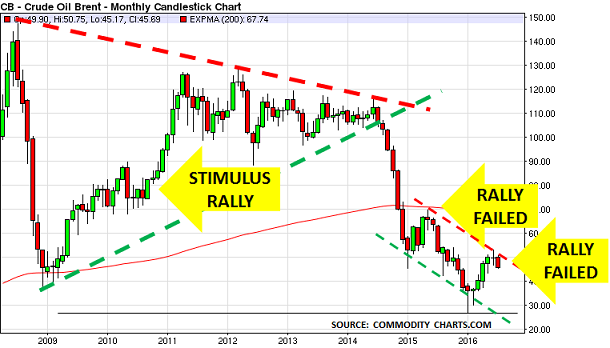 There was never any fundamental reason why oil prices should have doubled between January and June this year. There were no physical shortages of product, or long-term outages at key producers. But of course, there was never any fundamental reason for prices to treble between 2009 – 2011 in the Stimulus rally, or to jump nearly 50% between January – May last year.

 Instead, prices once again rose because financial players expected the US$ to decline
 They realised this meant they could make money by buying oil on the futures market as a “store of value”
 Now, as the US$ has started to recover, they are selling off these positions
 And so oil prices are falling again

The problem is that the financial volumes swamp the physical market – they were 7x physical volume at their 2011 peak- and so they destroy the oil market’s key role of price discovery based on the fundamentals of supply/demand. As I worried in an interview back in March:

“Now the central banks are doing it again. And so, once again, oil prices have jumped 50% in a matter of weeks, along with prices for other major commodities such as iron ore and copper, as well as Emerging Market equities and bonds. In turn, this will force companies to buy raw materials at today’s unrealistically high prices, as the seasonally strong Q2 period is just around the corner. Some may even build inventory, fearing higher prices by the summer.

“If this happens, and prices collapse again as the hedge funds take their profits, companies will … be sitting on high prices in a falling market in Q3 – just as happened in January. Only Q3 could be worse, being seasonally weak, and so it may take a long time to work off high-priced inventory.”

Today, just as I feared, the hedge funds are indeed now unwinding their bets and leaving chaos behind them. As Reuters reports, they have already “slashed positive bets on US crude oil to a 4-month low”:

Russia has confirmed the myth of an OPEC/Russia oil production freeze is now officially dead
US oil and product inventories hit an all-time high of almost 1.39bn barrels
China’s gasoline exports have doubled over the past year, and its diesel exports tripled in H1
Saudi Arabia’s Oil Minister has warned “There are still excess stocks on the market – hundreds of millions of barrels of surplus oil. It will take a long time to reduce this inventory overhang”

Even worse is that the world is now running out of places to store all this unwanted product, as Reuters reported earlier this month:

“Storage tanks for diesel and heating oil are already so full in Germany, Europe’s largest diesel consumer, that barges looking to discharge their oil product cargoes along the Rhine are being delayed”.

Similarly, the International Energy Agency has reported a major backup of gasoline tankers at New York harbor, due to storage being full, whilst Reuters added that tankers are being diverted to Florida and the US Gulf Coast to discharge.

Plus, of course, the recent rally has proved a lifeline for hard-pressed oil producers, who have been able to hedge their output at $50/bbl into 2017. As a result, companies have started to increase their drilling activity again, and are expected to open up many of the 4000 “untapped wells” – where the well has been drilled, but was waiting for higher prices before it was sold.

Yet wishful thinking still dominates oil price forecasts. $50/bbl has always been the “Comfortable Middle” scenario, as we noted in the Demand Study – and most companies and analysts are most reluctant to break away from this cosy consensus. Yet even in February this year, only 3.5% of global oil production was cash-negative at $35/bbl – just 3.4mbd. Today’s figure is likely even lower, as costs continue to tumble.

And in the real world, oil prices have already fallen more than 10% from their $50/bbl peak. Unless the US$ starts to fall sharply again, it seems highly likely that prices will now revisit the $30/bbl level seen earlier this year. Given the immense supply glut that has now developed, logic would suggest they will need to go much lower before the currently supply overhang starts to rebalance.

WEEKLY MARKET ROUND-UP
My weekly round-up of Benchmark prices since the Great Unwinding began is below, with ICIS pricing comments:
Brent crude oil, down 56%
Naphtha Europe, down 57%. “Market fundamentals weak. US gasoline blending demand poor,”
Benzene Europe, down 51%. “Spot prices moving higher over the course of the week alongside some upward movement in the US market.”
PTA China, down 40%. “Major producers are understood to still be in discussions with provincial authorities on a confirmed stoppage timeline for their PTA lines during the G20 periods.”
HDPE US export, down 33%. “China’s current import prices are higher than domestic prices.”
S&P 500 stock market index, up 11%
US$ Index, up 20%