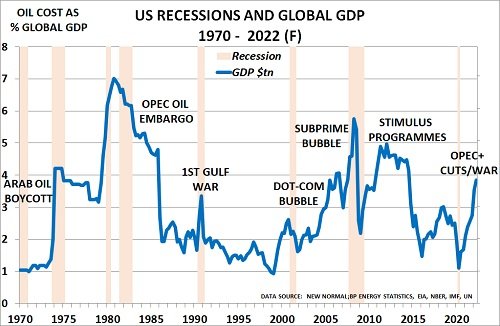 Recession seems inevitable with oil prices at today’s levels, as the chart confirms. And worryingly, leading oil trader, Pierre Andurand, suggests they could hit $250/bbl by the end of this year. Adding to the chaos, natural gas has already doubled to over $9/MMBtu so far this year:

The only time recession was avoided was a decade ago, when central banks were adding $tns of stimulus to the global economy. Today, they are busy removing all this surplus liquidity. 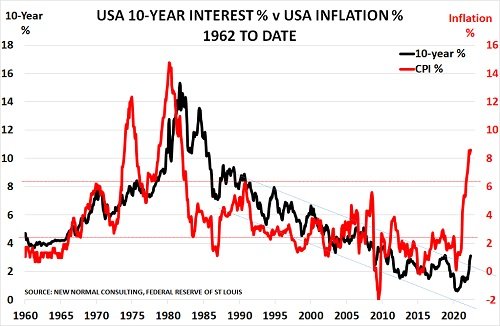 US interest rates and inflation are rocketing higher as a result, as the second chart shows. US inflation hit 8.6% last month, returning to levels last seen in the 1980s. Interest rates have more than doubled to 3.1% this year.

Retail sales are already seeing the impact.  Major stores including Walmart, Target, Home Depot and even Amazon have all got too much inventory as sales have disappointed.  Drivers are also cutting back as the cost of filling the tank hits record levels. 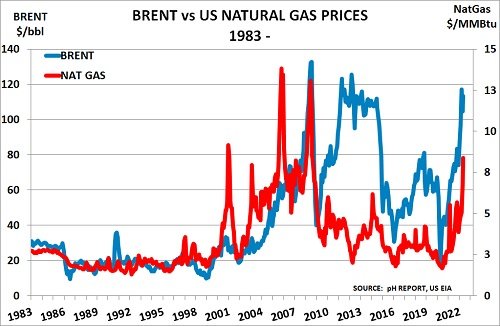 Unfortunately, the problems don’t end there. Energy price rises increase costs in most parts of the economy – from restaurants to manufacturing. And as the chart highlights, natural gas prices are at near-record levels too:

It is hard to see how these problems can be quickly resolved. Hopes for lower prices depend on 2 Scenarios – either supply increases, or demand reduces:

On the supply side, Russia is clearly now focused on recreating the Soviet Union, with President Putin even suggesting his aim is to recreate the eighteenth-century empire established by Tsar Peter the Great. So it seems unlikely he will suddenly reverse course.

On the demand side, China’s economy is certainly slowing fast due to the zero-Covid policy.  More lockdowns are already taking place in Shanghai and Beijing. But they are also adding to the shortages caused by supply chain chaos.

And the supply chain chaos is likely to increase as Europe starts to implement its oil embargo. 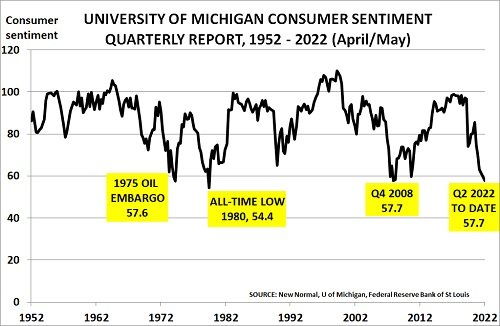 The chart highlights the risks ahead. The University of Michigan’s Consumer Sentiment Index has been running since 1952*. So far in Q2 it is equal to Q4 2008 and Q1 1975 lows. Last month it fell to 50.2, an all-time low on a monthly basis.

Consumer sentiment is already at all-time lows. Rising energy, transport and food prices will likely soon push inflation above 10% and interest/mortgage rates to 5%+, adding to the risk of a major and long-lasting downturn.