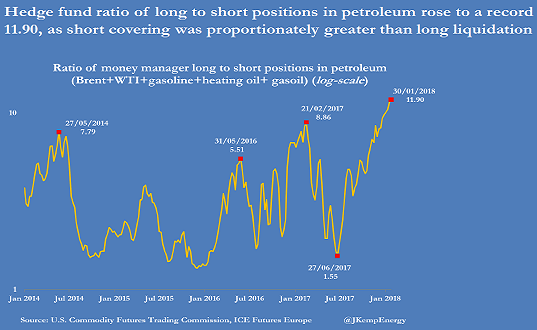 Oil and commodity markets long ago lost contact with the real world of supply and demand. Instead, they have been dominated by financial speculation, fuelled by the vast amounts of liquidity pumped out by the central banks.  The chart above from John Kemp at Reuters gives the speculative positioning in the oil complex as published last Monday:

The size of the rally has also been extraordinary, as I noted 2 weeks ago.  At its peak, the funds owned 1.5bn barrels of oil and products – equivalent to an astonishing 16 days of global oil demand.  They had bought 1.2bn barrels since June, creating the illusion of very strong demand.  But, of course, hedge funds don’t actually use oil, they only trade it. 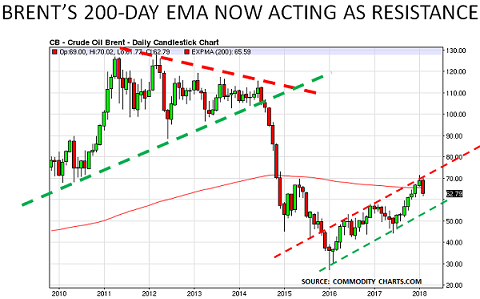 The funds also don’t normally hang around when the selling starts. And so last week, as the second chart shows, they began to sell their positions and take profits.  The rally peaked at $71/bbl at the end of January, and then topped out on 2 February at $70/bbl.  By last Friday, only a week later, Brent was at $63/bbl, having fallen 11% in just one week.

Of course, nothing had changed in the outlook for supply/demand, or for the global economy, during the week.  And this simple fact confirms how the speculative cash has come to dominate real-world markets.  The selling was due to nervous traders, who could see prices were challenging a critical “technical” point on the chart:

The main sellers were the legal highwaymen, otherwise known as the high-frequency traders.  Their algorithm-based machines do more than half of all daily trading, and simply want a trend to follow, milli-second by milli-second.  As the Financial Times warned in June:

“The stock market has become a battlefield of algorithms, ranging from the simple – ETFs bought by retirees that may invest in the entire market, an industry, a specific factor or even themes like obesity – to the complex, commanded by multi-billion dollar “quantitative” hedge funds staffed by mathematicians, coders and data scientists.”

JP Morgan even estimates that only 10% of all trading is done by “real investors”:

“Passive and quantitative investors now account for about 60% of the US equity asset management industry, up from under 30% a decade ago, and reckons that only roughly 10% of trading is done by traditional, “discretionary” traders, as opposed to systematic rules-based ones.”

Probably prices will now attempt to stabilise again before resuming their downward movement.  But clearly the upward trend, which took prices up by 60% since June, has been broken.  Similar collapses have occurred across the commodity complex, with the CRB Index showing a 6% price fall across major commodities:

This disappointment will end the myth that the world is in the middle of a synchronised global recovery. In turn, it will cause estimates of oil demand growth to be reduced, further weakening prices.  It will also cause markets to re-examine current myths about the costs of US shale oil production:

PREPARE FOR PROFIT WARNINGS AND POTENTIAL BANKRUPTCIES BY THE SUMMER
Over the summer, therefore, many industrial companies will likely need to start issuing profit warnings, as it becomes clear that demand has failed meet expectations.  This will put stock markets under major pressure, especially if interest rates keep rising as I discussed last month.

Smart CEOs will now start to prepare contingency plans, in case this should happen.  We can all hope the recent downturn in global financial markets is just a blip.  But hope is not a strategy.  And the risk of profit warnings turning into major bankruptcies is extremely high, given that global debt now totals $233tn, more than 3x global GDP.

FORECAST MONITORING
I strongly believe that forecasts should be monitored, which is why I always review the previous Annual Budget forecast before issuing the next Outlook, and always publish the complete list of Annual Budget Outlooks.

Since January, I have also been monitoring my blog forecasts, using the percentage mechanism highlighted in Philip Tetlock’s masterly “Superforecasting” book. Today’s forecast for oil prices to fall initially to $50/bbl is therefore now added to those on ethylene/polyethylene and the US 10-year interest rate. I am also increasing the confidence level for the interest rate forecast to 70%, and will continue to update these levels when circumstances change.