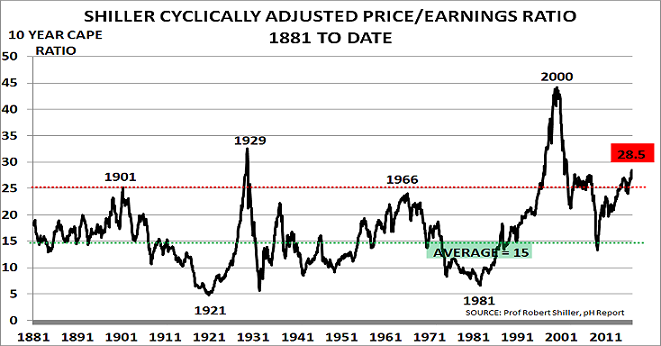 Wall Street’s post-election rally suggests that many investors currently have the wrong idea about Donald Trump. They have decided he is a new Ronald Reagan, with policies that will deliver a major bull market.

But those promoting this narrative have forgotten their history. Both men certainly share a link with the entertainment industry. But Reagan took office towards the end of one of the worst recessions in the 20th century. By contrast, Trump takes office at the end of an 8-year bull market.

Prof Robert Shiller’s CAPE Index (based on average inflation-adjusted earnings for the past 10 years), provides the best long-term view of the US stock market, going back over a century to 1881.  As the chart shows:

Is it really credible as a Base Case that the rally could continue for another 8 years?  After all, Trump himself claimed back in September that the US Federal Reserve was being “highly political” in refusing to raise interest rates:

“They’re keeping the rates down so that everything else doesn’t go down. We have a very false economy. At some point the rates are going to have to change. The only thing that is strong is the artificial stock market.”

Common sense would also tell us that Trump is about to make sweeping changes in economic and trade policy.  He made his position very clear in October with his Gettysburg speech.  And his Inauguration Speech on Friday explicitly broke with the key thrust of post-War American foreign policy:

Change on this scale is never easy to achieve, and usually starts by creating major disruption.  The expected benefits take much longer to appear.  This, of course, is why “business as usual” is such a popular strategy.  But it is clear that Trump is perfectly prepared to take this risk.  As he said at the start of the speech:

“We will face challenges. We will confront hardships. But we will get the job done.”

Many companies and investors are still hoping nothing will change.  But CEOs such as Andrew Liveris at Dow Chemical and Mark Fields at Ford have already realised we are entering a New Normal world:

   Liveris told a Trump rally last month that jobs would be “repatriated” from outside the USA when Dow’s new R&D centre opened, adding as the Wall Street Journal reported “This decision is because of this man and these policies,” Mr. Liveris said from the stage of the 6,000-seat Deltaplex Arena here, adding, “I tingle with pride listening to you.”
  Fields personally told Trump of their decision to cancel the Mexican plant and invest in Michigan, saying “Our view is that we see a more positive U.S. manufacturing business environment under President-elect Trump and the pro-growth policies and proposals that he’s talking about”.

The reversal of US trade policies will impact companies all around the world.  The White House website has already confirmed the planned withdrawal from the TransPacific Partnership – and from NAFTA, if Mexico and Canada refuse to negotiate a new deal.  China is certain to be targeted as well. Protectionism will start to replace globalisation.

This means that today’s global supply chains are set for major disruption.  This will directly impact anyone currently selling to the US, and US companies currently selling overseas.  It will also impact every supply chain that involves a final sale either to or from the US.  The Great Reckoning for the policy failures since 2009 is now well underway:

Sometimes, as US writer Mark Twain noted, “History doesn’t repeat itself, but it often rhymes”.