Markets cycle between greed and fear, with November seeing the “greed trade” turbocharged by vaccine news and Yellen’s nomination. But chemicals data suggests it is time to prepare for the “fear trade” to re-emerge. 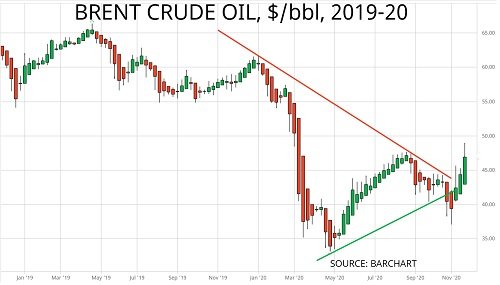 Brent duly stormed through its Fibonacci target last week, closing up at $48.30/bbl. And sentiment remains highly bullish despite record levels of Covid infections in the USA and other major economies. But in reality, we are nearer the end of the cycle than its beginning, with high prices now already boosting supply. Largely unnoticed, for example, the US rig count has jumped 26% since September. It has risen for 10 of the past 11 weeks.

The end of the cycle will also likely create a secular shift in the energy landscape, and some major new opportunities for investors:

History shows, however, that the US moves very fast when it starts to change direction.  And President-elect Joe Biden’s appointment of John Kerry as his Climate Envoy highlights his focus on regaining US leadership ahead of November’s Climate Change conference.

Investors will therefore likely be spoilt for choice as the cycles continue to turn. Oil prices could have quite a way to fall as today’s “greed trade” turns to “fear”, after more than doubling since March. And then pension funds are likely to make big bets on the Green agenda as the next “greed trade” appears, given the opportunities it will create. 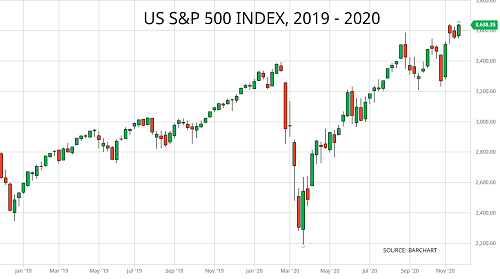 Markets celebrated the nomination of Janet Yellen as Treasury Secretary, closing up 2% at 3638, with the VIX volatility index falling 12% to 21.

Goldman Sachs had already led the cheer-leading after the vaccine news, forecasting the S&P will hit 4300 next year. Unsurprisingly, many investors are now saying they were too cautious.

But this view ignores the fact that Yellen’s real gift to investors was her support for the ‘Fed put’. As a new paper from the National Bureau of Economic Research documents:

This analysis suggests the first Yellen-Powell stimulus programme will be reactive, after the next stock market downturn. It is unlikely to be a proactive effort to push markets ever higher.

As promised, we also continue our series on FAANMG valuations, using the Ben Graham formula. Apple is next for analysis:

WATCH FOR: As noted before, prudent investors to lock in gains before year-end, as attention turns to Biden’s ability to work with Republican Senators like Susan Collins to implement his policies 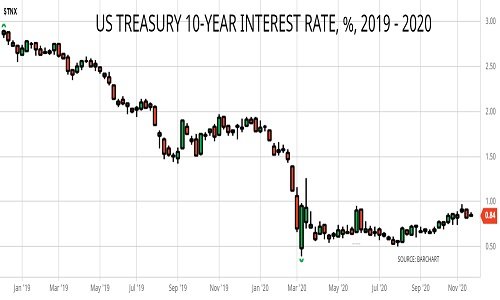 The rate rose to 0.84%, with the MOVE volatility index slightly lower at 40.

Unsurprisingly, the “greed trade” assumes economic recovery will finally create inflation. But we continue to see deflation pressures increasing due to the dual influence of (a) the low-spending Perennials 55+ generation on demand and (b) energy abundance created by the paradigm shift to low-cost renewables.

WATCH FOR: Downward pressure on interest rates to resume as and when the “greed trade” turns to fear. 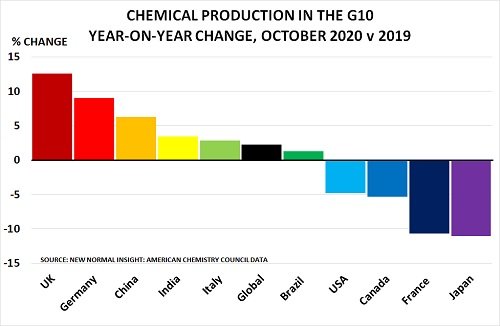 The chemicals industry is the best leading indicator for the global economy. The reason is that chemicals are used all around the world, and in almost every product. Best of all, the data is available is available within weeks rather than months, and in great detail – covering countries, regions and key industries. October’s data is particularly useful as the chart shows:

WATCH FOR: Renewed weakness in Europe and N America, as Brexit and the pandemic’s second wave impact.