Sign up for new blog post alerts
Home / What would 4 years of President Biden mean for financial markets? 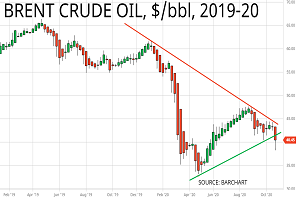 Oil prices led the rout back in March, as we predicted here at the time. And as today’s chart shows, prices moved sharply lower again this week, closing down 7.5% at $38.46/bbl.

Critically, they fell out of the “flag shape” that has dominated trading in 2020.  Flag shapes occur as the bulls and bears fight for leadership, and prices then often move quite sharply once the new direction is established.

The issue is that even the bulls have accepted demand has not recovered as they had hoped. And they are starting to realise OPEC+ is desperate for cash. Last week Iraq, OPEC’s second largest producer, warned its economy is threatened with “collapse”. A Biden win would further increase the pressure:

We discussed President Trump’s likely priorities for a second term last week. President Biden’s will be quite different. 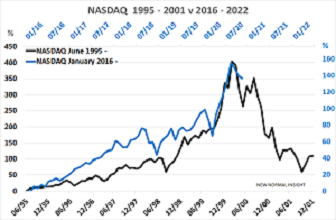 The S&P has its worst performance since March last week, falling 5.6% to 3270, whilst the VIX volatility index rose to 38.

Apple’s stock lost $111bn on disappointing results, suggesting investors may be reconsidering their love affair with the tech sector.

The chart shows how NASDAQ’s performance since 2016 has closely mirrored that of the dot-com bubble between 1995-2001. The difference, of course, is that the FAAMGs (Facebook, Apple, Amazon, Microsoft and Google) are currently 25% of the S&P 500, having delivered 72% of its gains since 2017. If tech now repeats its post-1999 performance, as many chartists are suggesting, then it won’t just be the NASDAQ that is hit.

A Biden win, particularly if accompanied by a win in the Senate, would likely deliver major change in fiscal, social and industrial policies. In markets, we would expect:

The most immediate result would likely be a sharp sell-off into year-end, as investors locked-in capital gains ahead of likely tax rises.

Fossil fuel stocks have been anticipating this for some time. As we noted, ExxonMobil was been ejected from the Dow Jones Index in early September. It was the longest serving member of the Index, and the world’s most valuable company as recently as 2011. 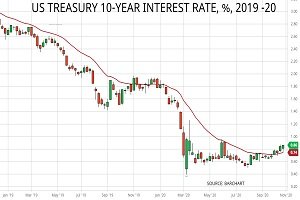 Bond investors can’t seem to make up their minds about interest rates. The 10-year rate closed marginally higher on Friday at 0.86%, but twice saw daily closes at 0.78%, whilst the MOVE volatility index rose 6% to 61.9.

Biden has not spoken much about interest rates, in sharp contrast to President Trump. This suggests Biden is likely to return to the previous arms-length relationship, in order to support financial market confidence and stability.

This hasn’t stopped some investors getting over-excited (in our view) about the likely impact of a Biden fiscal stimulus on inflation. But as the chart shows, this has happened before, with the rate temporarily moving above the 200-day moving average.

But then the reality of ageing populations, and their deflationary impact, returns to take rates lower again.

US Perennials 55+ lead population growth to 2030

Central banks have never really focused on demographics. They see it mainly in relation to increasing health care costs, and ignore its real importance.  But their myopia is increasingly being challenged by reality as the charts confirm:

Another issue is that Perennials are very dependent on pension income, Social Security and Medicare.

State pension schemes were already under major pressure before the pandemic, with unfunded pension/healthcare costs equal to 11% of 50-state personal income. And Covid has already led to major losses in tax income at state and federal level.

The sooner the Fed turns its attention to these vital areas, the better it will be for the economy.