“Bliss was it in that dawn to be alive, But to be young was very heaven!”  Investors’ excitement over Pfizer’s announcement echoed early views of the French Revolution. But as in 1789, the euphoria is unlikely to last. 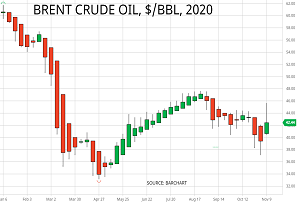 The balance of risks, however, remains firmly to the downside. Demand is not picking up, new production continues to come online in Libya and US drilling rig counts increased once again . Even OPEC has reduced its demand forecast for 2021 by a further 300,000 bpd.

This week, we publish our  quarterly auto industry  analysis in our flagship pH Report. It confirms the increasingly rapid take-up of electric vehicles (EVs) as they enter the steep part of the adoption S-curve. EVs and hybrids were 25% of the European market in September, selling more than diesel for the first time.

Oil/gas companies hoping the gas will be the fuel of the future are also going to be disappointed. The authoritative International Energy Agency’s annual Renewables report confirmed that solar and wind energy are rapidly replacing fossil fuels in electricity generation:

“Total installed wind and solar PV capacity is on course to surpass natural gas in 2023 and coal in 2024“.

WATCH FOR: More refinery closure announcements as oil companies adapt to the rise of electric vehicles 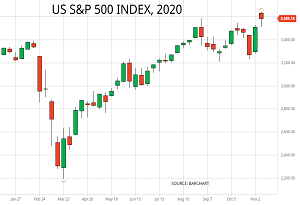 It was another record week for the S&P, which closed up 2.2% at 3585. Reflecting the risk-on mentality, the VIX volatility index fell back to 23.

However, beneath the surface, investors were starting to rethink their big bets on the FAANMGs stock, which have powered this year’s rally:

Excitement is never a good reason to buy the market.  And the market’s vaccine euphoria last week ignored the reality of rising Covid infections today – and likely into H1 – before any vaccine can start to have a real impact.  When a calmer mood returns, investors will also no doubt realise that sectors such as travel, leisure and real estate are in the middle of long-lasting structural changes, which will create both Winners and Losers.

WATCH FOR: The ‘vaccine euphoria trade’ to get a further boost from news of more vaccines in the pipeline. But oil stocks may come back to earth rather quicker. 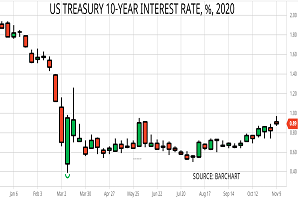 The rate closed up again at 0.89%, having soared to 0.97% on Tuesday, as vaccine euphoria led investors to assume ‘happy days are here again”.

In reality, the “vaccine euphoria” overlooks the fact that the pandemic will get worse before it gets better. The European economy is already turning down as lockdowns increase, and President Trump’s hands-off approach is unlikely to change – suggesting President Biden could inherit a highly-charged position in 2 months’ time.

WATCH FOR: High-yield spreads and the MOVE Index may give early warning that euphoria is giving way to reality. 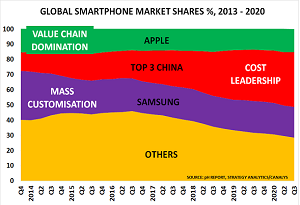 Samsung’s problem is that the global population is no longer growing because more babies are being born.  Instead, it is growing because of increasing life expectancy.  People no longer die around pension age, as they did in 1950.  As we discussed 2 weeks ago, a whole new generation is alive today, the Perennials 55+ generation:

Every company on the planet is being impacted by this change. Some will be smart and change their business models. Others will go bust as their hopes for a return to “business as usual’ are disappointed.

WATCH FOR: Investors looking for the famed “ten-baggers” should be watching for companies focused on supplying the Perennials.