Welcome to the first issue of New Normal Insight, which has evolved out of our Outlook briefing. It continues our focus on providing insight on the key financial markets – oil, stock markets and interest rates – along with other critical areas such as China.

The oil market continued its remarkably quiet run with Brent trading within a $1.50/bbl range for most of the week,  having fallen on Monday after the OPEC meeting.

Major economies are still struggling with the virus as the northern hemisphere enters into the colder weather.   Demand shows no signs of picking up and refiners are cutting rates in order to control stocks, particularly middle distillate and jet fuel.   And as we move towards year-end, cash-focused finance directors will pressure CEOs to reduce stocks to minimum levels.

Meanwhile as we highlighted last week, the temptation for producers to pump more is irresistible.   US drilling rig counts are creeping up from the lows, Libyan exports are restarting – and despite sanctions, Iran is exporting 1.5 mbd, twice as much as in recent months.

Absent a geopolitical crisis, prompt prices will have to fall in order to allow traders to pay the costs of using expensive floating storage. 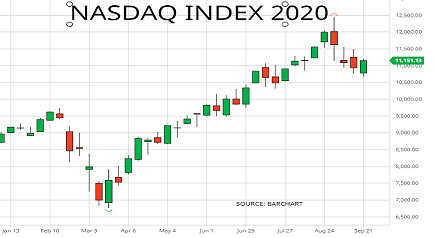 The market closed down for a fourth week at 3298, but the tech-heavy NASDAQ Index rallied to end 11% from its peak.

The Federal Reserve is now the world’s biggest investor. It has bought $4.8tn of bonds and stocks to support the markets.  Its friends at the Swiss National Bank have also been active – with its largest holding, 17.5m Apple shares. And the Bank of Japan is now the largest owner of Japanese stocks.

Yet last week saw Fed Governors out in force, warning that Congress now had to act to protect the US economy.

The real need, of course, is to get people back to work, and to rebuild confidence amongst the general public. But instead, even the wearing of masks has become politicised.   In turn, this is challenging the historical ability of the US economy to bounce back after an upset.

The Fed and its central bank friends will no doubt happily spend more $tns to support Wall Street. But their evidence to Congress suggests that even they are beginning to worry that this may not be enough to help Main Street. 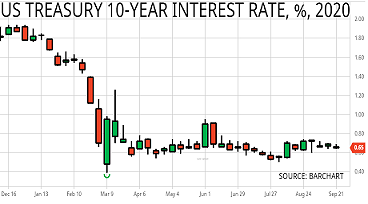 The rate slipped again last week, ending at 0.65%. And the Fed’s warning to Congress made it clear that supply/demand balances were shifting in the direction of over-supply.

In turn, companies are losing pricing power, especially as the Fed continues to support so-called “zombie companies” which are unable to even pay their interest bills out of earnings. As MarketWatch warns:

“In the first half of 2020, the number of zombies more than doubled. In certain sectors, this trend has become even more pronounced: The tally of energy and consumer discretionary businesses that fell into the zombie abyss tripled over that same time period. Smart investors have already seen that across the entire corporate landscape, technological changes and shifting consumer preferences have rendered many business models obsolete.”

The Fed’s focus on keeping these companies alive by buying their bonds does nobody any good. If a business can’t even pay its interest bill, only a fool or a philanthropist would continue to support it for the long-term. 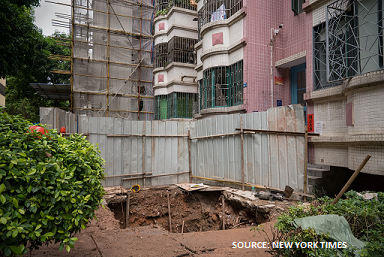 As a result, the government is moving from away from its export-focused policies, to focus on domestic demand. As the New York Times has reported, one example is the decision to retrofit millions of old apartment buildings with elevators:

“Without elevators, many longtime tenants become trapped in their homes, reliant on food deliveries and unable to meet friends or go for walks.”

The new policy will hopefully improve the quality of life for older people, whilst also creating work for younger people.