Everyone hopes that the new vaccines will prove effective. But we doubt there will be a quick return to ‘business as usual’. Instead, we expect important paradigm changes to impact markets in the West, and in China. 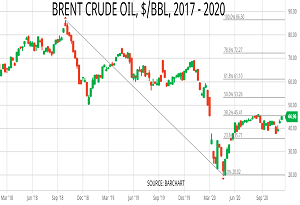 Brent closed up at 42.63/bbl. Today is Fibonacci Day, named for the famed Italian mathematician. And ‘technically-biased traders’ (the majority in futures markets) are focusing on Brent’s failure to break through the $45/bbl Fibonacci 38.2% resistance level shown in the chart.

Paradigm shifts in supply/demand balances and geopolitics are adding to their concern:

The usually well-informed Simon Watkins of Oilprice.com suggests that “MbS’s hold on power has never been more tenuous.”

WATCH FOR: Frayed tempers within OPEC as 2021 budgets are squeezed, leading to increasingly noisy rumours about the break-up of the group 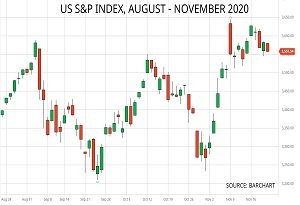 The Index saw some minor profit-taking after the latest rally, ending down 0.8% at 3557, whilst the VIX volatility index rose slightly to 24.

Traditional value-based investors have not done well in recent years. Momentum traders were the winners, as policymakers followed stimulus with $tns of Milton Friedman’s “helicopter money” in the form of zero-rate lending to corporates and cash payments to every household. The FAANGM stocks (Facebook, Apple, Amazon, Netflix, Google and Microsoft) have soared as a result, supporting both the NASDAQ and the S&P itself.

All good things come to an end, however, and there seems little sign of new stimulus or furlough payments in the short-term. This raises the question of where FAANGM prices might go, if traditional valuations ever returned:

If we take Facebook, for example, it currently has a P/E ratio of 32.61, suggesting annual growth of 12% out to 2030. This seems optimistic, given Facebook’s size, with regulators asking questions about its business model.  A flat growth scenario, with a P/E of 8.5, would give it a Graham Value of $71 versus today’s $270 level.

We will look at the metrics for the other FAANGMs in coming weeks.

WATCH FOR: We continue to expect prudent investors to take some profits ahead of likely higher taxes in 2021 in December, putting pressure on equity values 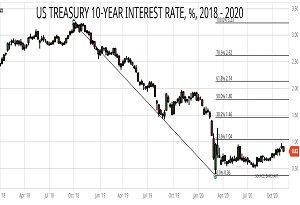 The rate slipped back to 0.82%, with the MOVE volatility index unchanged at 42.

The consensus view is that the helicopter money will finally create high levels of inflation – reducing current debt levels in real terms.  Consensus thinking is therefore convinced yields will rise, probably quite sharply.

We continue to believe, however, that a paradigm shift is underway due to today’s ageing populations, as discussed on 2 November. And as we discuss above, energy costs – the single most important economic input – looks set to fall rather than rise. We therefore see negative rates as more likely in 2021 than a major increase.

WATCH FOR: Volatility to continue till the battle between the inflation bulls and deflation bears is resolved 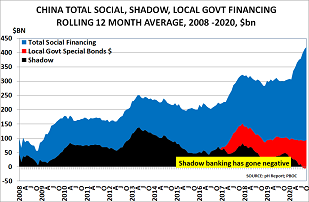 WATCH FOR: Investors to slowly realise that China is not repeating its massive 2009 stimulus via shadow banking, and is instead increasing regulation