Volatility has begun to rise in oil and bond markets, as we expected. China’s upcoming ‘Vision 2035’ seems likely to prove a major game-changer for its economic model over time.

Fears over the potential impact of Hurricane Delta helped prices rally to $43.67, before slipping back to close at $42.84/bbl, regaining the psychologically important $40/bbl level. The move confirmed our sense that volatility is likely to increase, potentially presaging a change of trend:

Price risks are therefore to the downside. The US rig count rose again for the 3rd week. Libya is already hoping to restore output to 1.7mbd from only 100kpd last month, and policy changes by a Biden Administration may well lead to higher Iranian and Venezuelan output over time. 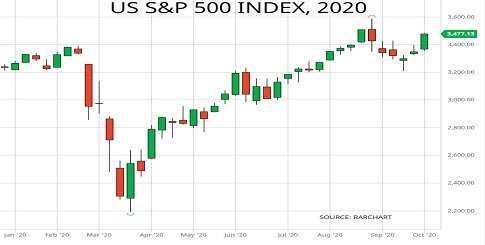 The Index closed up 3.8% on the week at 3477, for a second week of gains. And ignoring oil market developments, volatility measured by the VIX index declined ~5%.  Yet in the real world:

This combination suggests that ‘Fear Of Missing Out’ has returned as the driving force for investors.  Their logic seems to be that as the Fed already owns Apple bonds, there is nothing in principle to stop it buying Apple stock, if that is needed to keep markets moving higher.

The rate followed oil in seeing increased volatility, closing up at 0.77%. And the MOVE volatility index moved further off its all-time lows, jumping to 57.5 from 40 last week.  It could well rise further, given it was above 100 for most of March.

The upward moves in oil and stock prices, and in interest rates, suggest that investors are choosing to ‘look through’ current pandemic risks, and instead focusing on the 35.2% increase in Q3 GDP forecast by the Atlanta Fed. But the revival in the MOVE Index suggests this may not end up being entirely one-way traffic.

China’s stimulus programme makes it likely the economy will see a positive 2% increase in reported GDP this year, despite the pandemic.  As the chart shows, Total Social Financing has ramped up by 42% YTD August versus 2019 (a $440bn rise).

But long-standing worries about the sustainability of China’s economic model have been reinforced by the downturn:

Western media have so far largely ignored the critical 5th Plenum economic policy meeting at the end of the month.  But this will not only set the stage for the next Five-Year Plan (2021-2025).

It will also unveil the new ‘Vision 2035’ economic plan. This is likely to recognise that China can no longer rely on export manufacturing and property development to sustain its economy.

Instead, we expect a new focus on boosting domestic consumption and technological self-sufficiency (particularly AI and Big Data) alongside the launch of a Green Deal to boost environmental protection.