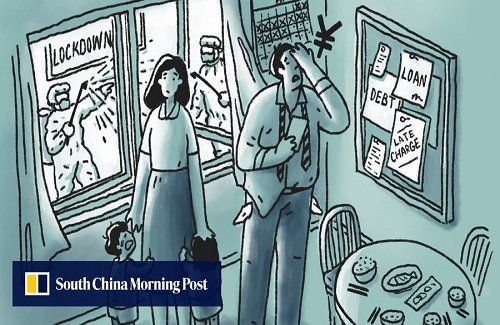 Borrowing money has appeared to be risk-free in recent years. Central banks had adopted the Bernanke Theory, which believed that “what was good for financial markets, was good for the economy”. So people borrowed as much as possible to buy houses, cars etc. And companies borrowed too, secure in the belief that they could always “roll over the debt”, and would never have to actually pay it back.

As a result, zombie firms are everywhere.  Back in 2018, the Bank for International Settlements (the central bankers’ bank) revealed that 12% of all listed companies couldn’t even pay their interest bill out of earnings. And 2 years ago, when the pandemic was only just starting, Deutsche Bank estimated that >18% of US companies were in a similar position.

China is the epicentre of the personal debt crisis, of course, as I have warned here in the past. In February, a Government report revealed that household debt ratios in relation to income had climbed to 62%, from less than 5% in 2000.

And now the problems of excess debt are starting to emerge, as President Xi continues his policy of bursting the real estate bubble.  As the South China Morning Post (SCMP) notes:

“Many Chinese who borrowed millions to invest in property, or who hitched their wagon to a now-curtailed tech firm, are growing increasingly fearful of salary reductions, lay-offs, crackdowns and lockdowns.

“Across China, people such as Eli Mai, a 40-year-old sales manager at a consulting firm in Guangzhou, were long held up as the envy of the middle class – empowering examples of what could be achieved with a decent job.

“Today, even as he owns two properties and remains employed, Mai is buried in debt and constantly worries about losing his job in the face of poor economic prospects and mounting pressure from both domestic and international sources.

“His salary has been slashed in half due to lost commissions, and he is pulling in about 10,000 yuan (US$1,570) a month. Meanwhile, his family’s total debt has ballooned to a whopping 3.5 million yuan.

“My hair has turned quite white in the past six months, and I am afraid day and night that I will not be able to make the [monthly loan] payments,” he said, adding that these have surpassed 25,000 yuan – more than the current combined income of Mai and his wife, a teacher.
Real estate is a huge share of household wealth (perhaps 60%) in China. So as the debt bubble bursts, consumption will collapse with it.
CORPORATE BORROWING IS AT RECORD LEVELS IN THE WEST 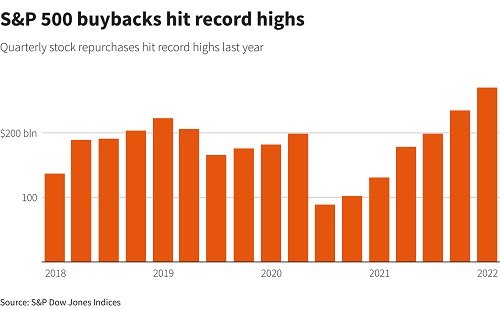 China has effectively been “subprime on steroids” over the past decade, as the SCMP confirms. In the West, however, the debt problem took a different form after the 2008 subprime crisis.

Central banks cut interest rates to zero, and kept printing trillions of dollars to keep financial markets moving higher. So companies took on more and more debt, which they sold to pension funds desperate for yield. “What could possibly go wrong“, one might ask?

As the Reuters chart shows, Share Buybacks are at record levels. And this leverage has made many CEOs look like a genius:

The seeming genius of many private equity funds in recent years has been based on this ability to borrow at cheap rates during the ‘up’ part of the business cycle. Now we are heading into the ‘down’ cycle. And the central banks have abandoned Bernanke Theory and are back to worrying about inflation. So today’s excess leverage means many over-leveraged companies will go bust. Sadly, many investors have also leveraged their investments and risk seeing their hair go white too.